“THAT METAL SHOW” RETURNS THIS SATURDAY AT 9:00PM ET/PT WITH THE MOST DIVERSE LINEUP OF GUESTS IN THE SHOW’S HISTORY 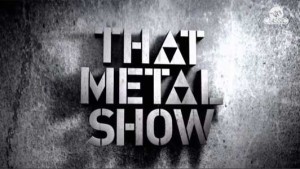 With Season 14 of “That Metal Show” already making history (the Season 14 premiere was the second most watched Season Premiere in the history of the series) VH1 Classic’s centerpiece in original programming makes history again with its most diverse lineup of guests since the show began. This week’s show features legendary punk drummer Marky Ramone of the Ramones, Hip-Hop’s “King Of Rock” Darryl “DMC” McDaniels of Run DMC, and thrash forefather and guitar hero Gary Holt of Exodus/Slayer.

The episode also features Whitesnake’s new guitarist and TMS alum Joel Hoekstra making his return to “That Metal Show” as the guest musician. Joel dazzles the crowd with his incredible playing abilities and gives us some insight about the upcoming new Whitesnake record called The Purple Album slated for release on May 19th. Whitesnake singer and longtime friend of the show David Coverdale checks in via the “Metal Modem” from the recording studio where he is presently laying down the final tracks for The Purple Album.

Marky, Darryl, and Gary are candid and reveal their love of classic rock in the “Put It On The Table” segment. Eddie has a difficult time with “Stump The Trunk” this week and “Take It Or Leave It” has the guys discussing music streaming services and how they feel it affects the current music business. The “TMS Top 5” discusses the hosts’ favorite Album Closers and the “Throwdown” pits two genre smashing songs against each other as Run DMC/Aerosmith “Walk This Way” faces the Public Enemy/Anthrax “Bring Tha Noize.”