SEBASTIAN BACH DISCUSSES KISS, EDDIE TRUNK AND THE POSSIBLE SKID ROW REUNION, WHICH HE NOW SAYS “UNFORTUNATELY, [MAY NOT HAPPEN] 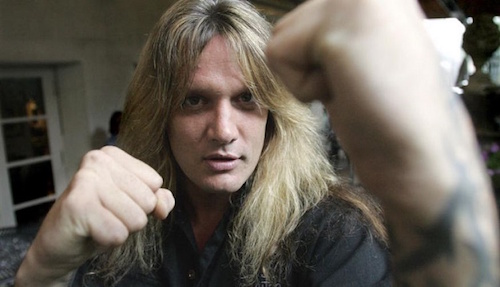 Michael Christopher of Vanyaland spoke with Sebastian Bach. Portions of the interview appear below.

Michael Christopher: When you started writing this book [18 and Life on Skid Row], what did you want to do to make yours different from all the other rock star memoirs out there?

Sebastian Bach: I wasn’t necessarily out to make it different,I just wanted to make it good, and I wanted it to be a book that you could read and think it was a good, well-written book, regardless of whether you’re a Skid Row fan or not. A lot of the reviews start off saying exactly that. It’s a good book. And maybe I haven’t said this in an interview yet, but taking calls and talking about my second book [laughs]. It’s amazing [laughs].

Michael Christopher: What was it like revisiting a lot of those stories; what sort of memories did it bring up?

Sebastian Bach: Well, it made me change my setlist. Writing about all these times made think about the records that came out; most notably the first Skid Row record. I’m always out on tour, so I was thinking about them songs and I’ve added songs into the set that I haven’t done in years like Sweet Little Sister and Rattlesnake Shake and Quicksand Jesus, Breakin’ Down. Writing about those albums and tours made me reminisce for those songs.

Michael Christopher: I’ve interviewed people that I’m a huge fan of, and sometimes — and it’s extremely rare — they pull an attitude or act like a dick, I mean, maybe they are having a bad day, but it taints my opinion of them a little bit. You talk in the book about how bummed you were that Paul Stanley didn’t stick around when he came to see Jekyll & Hyde and in fact left mid-performance. Did that do anything to dim your love of KISS?

Sebastian Bach: No… I won’t let anyone take my love of KISS away from me, not even — anybody — at all [laughs]. I flipped a switch in my head when I was a little kid… I love that, it’s my favorite kind of thing, I collect it. I was just sad because I’m the biggest fan and I just wanted to tell him how much I respected him and looked up to him and all that. But I really think this book, at the end of the day, one of the things about it, it’s like a love letter to KISS. I was really inspired when I saw the Rock and Roll Hall of Fame and Tom Morello’s speech where he inducted KISS and the way that speech hit me, I was like, electrified and in tears like when I was a kid because he really captured the excitement of that feeling. I said, “Oh my God… I have got to f–king write down and put into words my side of that,” because I was a freak [laughs]. And I know I did, because every time I read that, it’s always emotional and very hard for me to read — there’s a bunch of parts of the book that are like that — that’s how I knew I was done the book.

Michael Christopher: Have you gotten any negative blow-back from people; I mean, that Ted Nugent section is just brutal. It’s honest — but it’s brutal.

Sebastian Bach: Well, Ted can say whatever he wants in life; he has no filter on what he says. He’s not the only one like that — I could say what I want to say. The only blow-back I’ve gotten is from Eddie Trunk [laughs].

Michael Christopher: Is it because you didn’t mention him by name? [Trunk is referred to as “the DJ” while the story is told of how Bach got Axl Rose on the air for what became a legendary radio interview in 2006.]

Sebastian Bach: I actually did mention him by name in a version that somehow didn’t get in the final version…

Michael Christopher: This book’s release has been really high profile, and of course it’s got people talking about the topic of a Skid Row reunion. My question about that, which I haven’t seen asked, is, obviously there is some resentment or anger from certain members preventing it from happening. Would it matter to you if the reunion did happen, but it wasn’t based out of burying the hatchet, but because various managers were able to work it out? I mean, the fans win either way, but personally, would you rather you be on great terms rather than five separate dressing rooms?

Sebastian Bach: I can’t answer that. All I can say is in recent days, when I said before that the managers [of Bach and Skid Row] “are talking,” I have to say now that the managers “were talking” [laughs]. I’m sorry! I’m sorry! Wah, wah, wah, wah, wah. It’s kind of actually… I don’t know really why, but it’s taken a turn in the other direction, unfortunately. You can bust the bad news to everybody. I’m really so busy, that it’s beyond comprehension. I would love to do that, but if it doesn’t happen, I’ve got a lot of other things on my plate to tackle. So whatever happens, happens, but it’s not even up to me whatsoever at all — it has nothing to do with me — it’s just me [laughs].

Michael Christopher: There’s already talk about a second book. Now, some things in the book were left out, for instance you being considered as a replacement singer for both Mötley Crüe and Van Halen. And I know it’s way too early to have even thought about it, but do you think there’s a second book in you?

Sebastian Bach: I know for a fact there’s a second book in me. I could’ve kept going on this one, I could’ve made this one longer, but they cut me off because it’s already pretty f–king long [laughs]. I like to write — I really like it, and I enjoy it. I enjoy making stuff, but the next thing I make will be a record, a vinyl record.That’s the next thing that I’m gonna make. But after that, yes, I’ll do a book, because they want me to and I enjoy it.

Michael Christopher: You just mentioned, and you’ve said this in a bunch of interviews, how you are a fan of rock and roll biographies and memoirs. Is there anyone out there who you’re waiting to put one out?

Sebastian Bach: Yeah, Eddie Van Halen would be good. I would love to read that. I would like to read Eddie Van Halen’s book as much as I would like to see the new [former W.A.S.P. guitarist] Chris Holmes reality show [laughs]; that sounds like a good show to me. To go with his new record Shitting Bricks — that’s a good title [laughs]. That was the title when I saw it on the internet that caught my eye. His record’s called Shitting Bricks? I said, “Damn, I got my work cut out for me, topping that one.” I like that, very catchy [laughs].

18 and Life on Skid Row by Sebastian Bach is out now and can be purchased at Amazon.

‹ RIOT V RELEASE VIDEO FOR “BRING THE HAMMER DOWN”