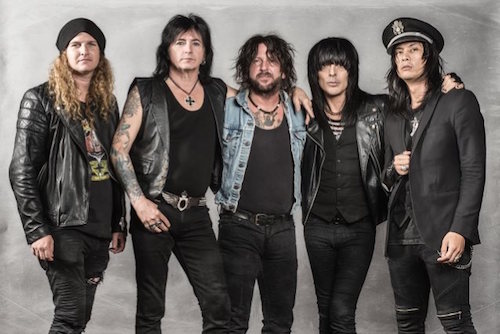 Johny Martin, bass player for L.A. Guns joined the Monday August 17th edition of Another FN Podcast With Izzy Presley along with Barry Pointer of The Anatomy. They were talking The Anatomy and Soundcheck Live, the new L.A. Guns single, Speed, their upcoming record, touring with this version of the band, Michael Grant and Tracii Guns complimenting either others playing, the Adrenaline Mob tragedy, and had a call in from Ace Von Johnson of Faster Pussycat who is currently out on the road.

Martin, who is close friends with Adrenaline Mob tour manager Janet Reigns said “One of my dear friends,” “she’s in critical condition. I heard that things are getting better, that they got the smoke out of her lungs, [as she] is also a singer. They said that she’d be able to sing again. I don’t know exactly what’s going on, I don’t know if she’s in a coma, or what, but things are getting progressively better within the past couple of days. So, we’re just praying for her and everyone involved.”

He continued, “It was very vauge, the info that I got. I know everybody’s gotta be clamering to get information from people closest to her but what I heard was from the neck up she’s not badly burned, but her chest and back I believe is…it got the worst of it. That’s what I’ve heard.”

L.A. Guns have just gotten off the road and are amping up for another run to take them into August before they take a break leading into the release of the brand new record on October 13th. There may be some things, here and there between then, but they are trying not to oversaturate until the album drops. \

The album started being recorded in late 2016/early 2017 and was a true group effort with everybody contributing.

“What had happened was, we had our first official show with Phil, at the Hair Nation Festival, that was September of last year. Everything went great. And then we waited, you know Tracii got some songs together, we all got songs together…everybody wrote something on this record, if not everything, together. And then Tracii and Shane, the drummer, Shane Fitzgibbon, they laid down the basic tracks probably, in I wanna say December/January, and then the rest of us went in and cut everything. We finished it, mid-March, I believe? You know, a few tweaks here and there, gave it to the label, see what they had to think…brought it back, we had a few things we wanted to change and yeah, it’s submitted to the label” Martin said.

Martin gave us a little preview of some other tracks (not on the show so don’t get all excited), but also played a couple tracks for Barry Pointer on the ride over.

“Johnny played a song for me in the car on the way over here and I totally hear this grinding punk thing underneath it, it’s cool”, Pointer commented.

“It’s a fresh thing”, Martin replied, “You have Phil and Tracii together, you’re gonna get that sound regardless. But, we have three new guys as kind of a fresh…we’re all songwriters.”

When asked how it is playing with Tracii and Phil together, Martin said ““Since our first show in September, that love is still as genuine as it was back then- now”.

They have a great chemistry together, it’s like a lot of people are like ‘I guess they’re doing it for the buck.’ Well yeah, we’ve gotta make a living, but Phil and Tracii, are genuinely happy together. You see that on stage…they look like Joe Perry and Steven Tyler…sharing the mic at times. [Also], with the chemistry of Mike and Tracii, it’s just phenomenal. You have two different types of guitar players, but two amazing guitar players and it works.”

Martin also commented on the feeling of doing it now compared to that 1st show in September, “It still kind of feels the same. I know what to expect out of it a little bit more, out of a show, but still the audience doesn’t ‘cause they’re seeing this for the first time in years. So that excitement, I’m still feeding off that from everywhere that we play.”

Another FN Podcast airs Monday nights via spreaker and is live at spreaker.com/user/izzypresley.