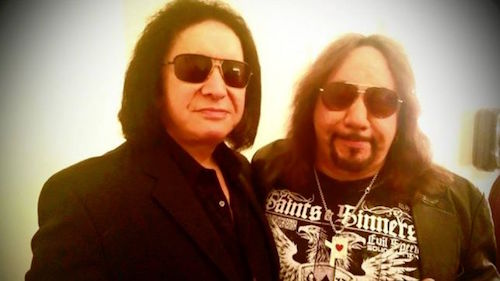 KISS bassist/vocalist, Gene Simmons, has revealed that he’s co-written two songs with Ace Frehley for the guitarist’s next solo album.

Former KISS guitarist Frehley hooked up with Paul Stanley last year to record a cover of Free’s Fire And Water for his Origins Vol.1 album – and revealed in 2015 that he had toyed with asking Simmons “to play bass on a track and sing with me.”

When asked if KISS were poised to record new music together, Simmons tells Minnesota radio station 92 KQRS, “Well, I suppose at some point. But literally two days ago I was with Ace and we wrote two songs. He asked me to write for his next solo record. So I went over to his place, way out in the desert some place, and we wrote two things.”

In March this year, Simmons reported that he had no inclination to record another KISS album because people would just illegally download it if they did. He reiterates the point by saying, “Eventually the band will go back in. But there’s no great incentive because the record industry, the entire thing, is so dysfunctional. You work hard and you get paid, and if we’re going to work a year on a record, I want to get paid too. KISS is not a charity. We make a difference between what we do personally and as a band. We buy houses for vets, we supply jobs, we give money to charity, but that’s because I want to give. I don’t want anybody deciding that our art, our music, our concerts is free, because ‘you have enough money.’”

In February, Stanley ruled out the possibility of Frehley returning to the KISS lineup after increased speculation at the start of the year.

[Dana’s note: Thank you, as always to, T, for passing this story, along.]

‹ BLACK SABBATH’S “THE END OF THE END” TO BE SHOWN IN MOVIE THEATERS, FOR ONE NIGHT ONLY, ON SEPTEMBER 28TH