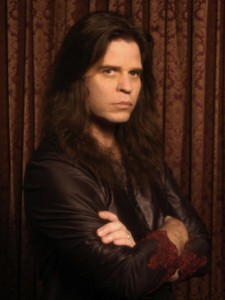 Sleaze Roxx: You spent some time writing for Warner Brothers. You wound up writing “Lady Luck” with David Lee Roth for A Lil’ Ain’t Enough. Who hooked you up to write with Roth? What was that experience like? And were you considered for the band?

Craig Goldy: Because Ronnie and I wrote the bulk of Dream Evil, Warner Brothers was pretty impressed by that. They signed me as a songwriter. As a songwriter, you get carte blanche. I’m sure you’ve heard of the director, the producer and the star of the film watching it in an empty theater? So that was me. They’d bring me in and they’d say, “We need a song like this for this part of the film and a song like that for that part.” All I had to do was go home, write a song and submit it. There was a weekly journal that would get circulated to songwriters that featured artists that were soliciting songs or songwriters. There was everyone from Diana Ross to Barbra Streisand. They often didn’t write their own songs or the music. I would submit song after song to artists and my songs would continuously get turned down. I needed to find out why. So I began to study hit songs and I began to create templates of those hit songs with my original material. It made me work ten times as hard as I had before. I played everything on the demos and learned how to do everything.

The Roth thing — I recall a call came in and my girlfriend at the time answered the phone. I looked at her. There was this look on her face. It’s either going to be really bad or really good. I take the phone and I hear; “Hey man! Dave Roth here! I love your s–t, man! You got any more stuff, man? Can we get together and write?” I was like “Wow! Yeah!” Dave was working with Bob Ezrin at the time, which was awesome because one of my favorite Pink Floyd records was produced by Bob Ezrin. So, I got invited to Bob Ezrin’s house to present more material to David Lee Roth for his next solo album. Dave liked me so much he invited me to his home for two to three months. I have to tell you it was an amazing experience as you can imagine. That was my first gold record.

Sleaze Roxx: We were talking about Dream Evil earlier. I think that record was a return to form for Dio. What I mean by that is that Holy Diver and Last In Line were records that were on par with the Dio Sabbath catalog but when it came to Sacred Heart, it was polished and perhaps “too commercial” sounding. When Dream Evil came out, it had a little bit more grit to it.

Craig Goldy: Quite honestly, I agree with you. Yes, I see what you see and hear what you hear. I think the fans heard it too. I think the stage set saved that record [Sacred Heart], but there were some very good songs on it. There were a few songs that I was unsure about; a song like Shoot, Shoot. I was like “Hmmmm….I’m not sure about that.” It was more polished. I think Ronnie was caught up in trying to compete with the stuff that was coming out around that time. I think he was starting to feel pressure from the record company. After all, it is a business. I remember sitting in the studio when we were recording Dream Evil and at the end of I Could Have Been A Dreamer, I was supposed to go back to your favorite line in that song “Running with the Wolf Pack…” It was supposed to end with that. It was going to be badass. Then the record company stepped in and said we needed to go out with the chorus because they felt it could be a hit song. Ronnie said, “Okay.” I was so bummed out.

At the time, I didn’t understand how things worked. That was my first introduction into how artists and record companies have to co-exist and how sometimes we have to make compromises. That was a real eye opener. From what I understand there was a little more of that happening during the production of the Sacred Heart album. Ronnie said that when I came in for the Dream Evil album, I revitalized the band. When they were writing the Sacred Heart album, some of the guys in the band had become disenchanted. They weren’t giving it their all. When I came in there was a new fire that was lit because it was such a new thing for me. It was contagious among the band.

Sleaze Roxx: In closing, is there a particular Ronnie story that you’d like to share with us?

Craig Goldy: I remember one time, it was really cold… Ronnie was the first to get there and he was the last to leave. He’d go out with the crew and he’d hang out with the fans afterwards. I’d just hang out with him because I wanted to learn from him. That band [Dio] was run like family and the band members were like family members. I can’t stress this enough. The band was run in such a special way. While the crew was packing up, the fans were gone and the band was gone, Ronnie would go back into the venue and help the crew pack stuff up. He’d talk to the crew, the caterers and the truck drivers. I always thought that was cool. There was this limousine waiting for us at about 3 am I think. We had something like a 6 am lobby call to get on the bus to get to the next city in time for soundcheck.

I remember that it started raining. We’re in this stretch limousine. He’s on one side and I’m on the other. We start driving away and we see these two kids huddling in the corner of the coliseum standing in the rain. Ronnie says to the driver “Wait! Pull over!” Ronnie rolls down the window and calls the kids over. They were waiting outside hoping to meet Ronnie and they didn’t get to. So, one comes over on one side and one on the other. We started talking to them and it started raining even harder and the rain was coming inside! So Ronnie and I looked at each other and we both said “F–k this!” at the same time. The kids look at us and said “We’re sorry! [laughs]” So Ronnie says “No, no, no. If you can stay out in the rain and wait for us, we can stand out in the rain and sign autographs for you.” So we both step out of the limousine. We should have invited them into the limousine, which would have made more of statement. We stood out in the rain with them and signed all their stuff. Somewhere, there’s two kids who have the other side of that story.

‹ SINGER MICHAEL MONROE DISCUSSES THE POSSIBILITY OF A GUNS N’ ROSES REUNION, SAYS “IT WOULDN’T MAKE ANY SENSE UNLESS SLASH AND AXL WOULD RECONNECT AND REALLY GET INTO A NEW KIND OF THING”