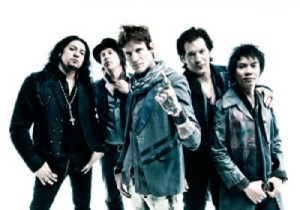 Next month Buckcherry will release Confessions, their sixth studio album and a concept record based on the seven deadly sins.

Watch the premiere of the video for single Gluttony brought to you excluisvely by Noisecreep.


“The concept of the video is excess, consuming everything excessively, and moderation is not even in the equation,” Todd told Noisecreep abut the clip. “I’m very familiar with that, and a lot of guys in the band are familiar with that. Because the record is called Confessions, we filmed the video in a church, we got Jesus down here – which is killer – and we got a lot of our fans in it, which is amazing – they came out on their own time and have really put in a lot of sweat equity, so thank you to them.”

Buckcherry are in the middle of a North American tour, and beginning February 2nd, they will be joining Kid Rock on the “Rebel Soul” Tour. See tour dates below.

Confessions will be released on February 19th through Century Media. Pre-order the CD/DVD Deluxe edition here.

With Kid Rock and Hellbound: