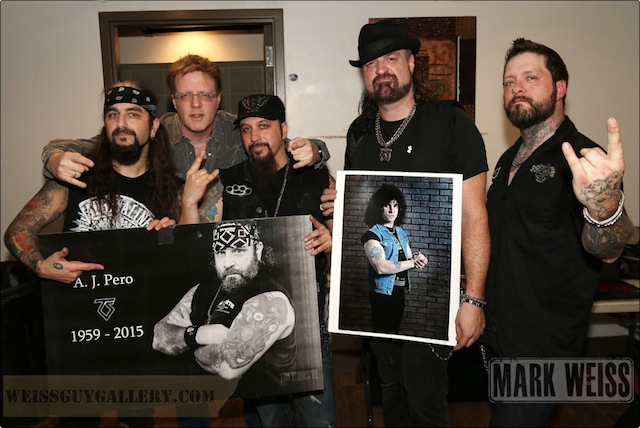 Jay Jay from Twisted Sister finished night with his favorite joke that A.J. told him and then performed the Sister classic, You Can’t Stop Rock N’ Roll.

Watch a video below from the show. AJ will be missed but not forgotten.

He said of Pero’s health, “You know, he would be in the dressing room… Drummers are like… They’re the most… ‘Oh, my arm. My shoulder.’ That kind of a thing,” French said. “Put the Bengay on and take the aspirin. But that’s stuff that you just figured were like battle scars — that kind of a thing. I didn’t know the extent… that he had heart problems; he never confided in me. In fact, here’s the ironic thing… On Thursday [March 19], I had to call him, because I had to bring him up to date on what was going with the band, ’cause so much stuff is happening. We’ve got a documentary coming out this year on the beginning of the band [and our] history; we’ve got, like, three CDs coming out with live stuff from back in the day. A.J.’s on one of them. The Donington concert’s coming out for the first time on CD. And I said to A.J., ‘You know, we’ve got to really sit down and plan what we’re gonna do, because we’ve got this DVD in Vegas that’s supposed to be filmed at the end of May. And the band’s thinking about, you know, maybe we should put a plan together to figure out… you know, maybe it’s time to bow out. There’s so many things in the works, there’s so many plans and things to discuss. And he said, ‘Listen, there’s one thing you have to know.’ He goes, ‘My shoulder’s been bothering me, and I’m leaving the ADRENALINE MOB tour, so when you hear through social media that I’m not on the tour, there’s no problem. It’s just my shoulder. I’ll get into rehab for the summer.’ This is what he says to me. Just like this. He goes, ‘Don’t worry about anything. All the dates are good. I’m good. Everything’s good,’ I said, ‘Okay.’ I said, ‘When are you home?’ He said, ‘I’m playing The Chance [in Poughkeepsie], and then I’m home Sunday.’ And I said, ‘Let’s get together Monday.’ He says, ‘You’ve got it, brother.’ That was it….Here’s what I think. That shoulder pain wasn’t the muscle strain. It was indicative of something far worse. But, you know, the problem in metal and rock and roll in general is that we always tend to think it’s the alcoholics who are gonna go. Those are the obvious ones. The stories you hear about John Bonham, Keith Moon… They tear up hotels, they’re drunk, they make real spectacles of themselves, [and then] they die. Those are the guys [where] you just go, ‘Okay, well, they lived that kind of life.’ Like the fact that Keith Richards is alive, I think, is kind of mind-boggling to me. But having said that, A.J. wasn’t one of those guys.”

‹ WHITESNAKE STREAMING THEIR VERSION OF “BURN” FROM “THE PURPLE ALBUM,” DOWNLOAD IT FROM ITUNES