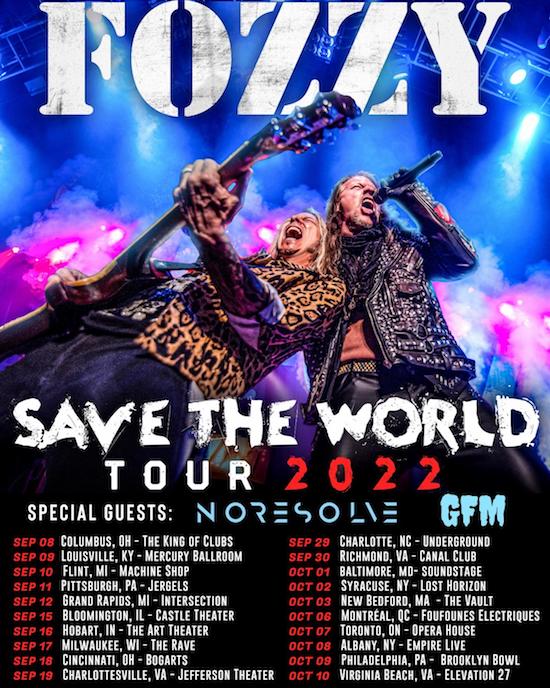 Fozzy has postponed the remaining dates of its previously announced summer/fall 2022 Save The World tour due to a throat injury suffered by the band’s lead singer, wrestling superstar Chris Jericho.

According to Fozzy, Jericho sustained a bruised larynx last month at the AEW ‘s Quake By The Lake event in Minnesota where he squared off against Jon Moxley for the interim AEW world championship.

On Thursday (September 15th), Jericho released the following statement via social media, “After five weeks of waiting for my bruised larynx to heal with minimal results, my Laryngologist sent me for a vocal stroboscope today (Thursday, September 15th). This is a procedure in which a camera with a strobe light attached, takes detailed pictures of your vocal cords to find any hidden issues. Now, I’ve never seen my vocal cords before (have you seen yours?!), but once I got past their gnarly appearance, I could see what the Doctor’s were seeing plain as day….that the left side of my larynx is still bruised and swollen.

Good news is it’s not permanent and it IS healing. Bad news is I still need more time to heal, in order to be able to sing at 100%. Therefore we are forced to postpone and reschedule the rest of the 2022 US leg of the Save The World Tour.

Nobody likes to move shows, least of all me, but if Fozzy, and I, can’t give you 100% during each and every show we do, we won’t do them. Therefore we are moving the shows to the spring of 2023.

We will see you at the rescheduled dates in 2023 and in the meantime thank you for your love and support and for making I Still Burn our biggest hit since Judas. We love you!”

All tickets will be honored for rescheduled dates.

Due to scheduling conflicts, Montreal, Toronto, Richmond, Lowell and Albany will not be rescheduled. Please contact the venues for refunds.

‹ KISS’ GENE SIMMONS REVEALS THAT HE DOESN’T HAVE ANY FRIENDS