WOLFGANG VAN HALEN DISCUSSES SONGS ON HIS FORTHCOMING DEBUT ALBUM, WRITING ON VAN HALEN’S “A DIFFERENT KIND OF TRUTH AND WHAT HE THINKS IS THE DEFINITIVE VAN HALEN SONG, HINT THERE IS TWO 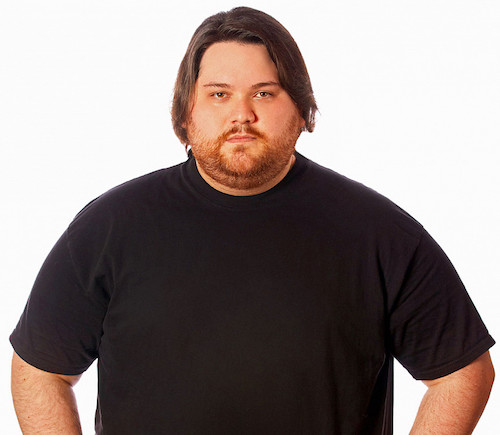 Greg Prato of Songfacts spoke with Wolfgang Van Halen, highlights from the interview appear below.

Greg Prato (Songfacts): First off, that’s a heck of an album cover [for Manmmoth VH’s debut recording (see below)]! What’s the story behind it?

Wolfgang Van Halen: It’s a piece of art I’ve been a fan of for a very long time from this artist named John Brosio. I’ve been a huge fan of it for, gosh, about seven or eight years now. I think he made it in 2006 or 2007. I just love the way it represents the word “mammoth.” When I think about the word, the animal is the last thing I think of. I think it really encapsulates the word in a really fun and creative way.

Songfacts: What made you decide to record all the instruments yourself for your debut album?

Wolfgang: Since I could, I just wanted to have a go at it, like Dave Grohl did for the first Foo Fighters album. A personal challenge, I guess.

Songfacts: How would you compare writing and recording the material yourself to your experience with Van Halen’s [2012 album] A Different Kind Of Truth?

Wolfgang: It’s a really fun and freeing experience to just be on your own and just fully go for it. With the Van Halen album, there was a lot riding on it – just in terms of how long the last album had come out and just the band’s history. There was a lot more pressure. With this, the creative experience was very freeing, and it was fun to just follow what I wanted to hear.

Songfacts: Did you have any trepidation going into the recording as the lead singer?

Songfacts: Let’s discuss the lyrical meaning behind several of your tunes…Don’t Back Down?

Wolfgang: Don’t Back Down, the demo title was Saltbath, which was just a joking mess-up of the word “Sabbath.” It has that kind of shuffle-y, Black Sabbath vibe. It’s a fight song when you want your team to decimate the other team.

Wolfgang: Feel is lyrically rooted in my anxiety, where I always feel like something’s wrong, or that I’m doing something wrong and that everything is my fault. Just constant anxiety stuff.

Songfacts: Would you say anxiety and depression is something that you struggle with?

Songfacts: It seems like more people today are being diagnosed with anxiety, perhaps because doctors can diagnose it better than in the past.

Wolfgang: I think back in the day, it was like, “Why are you sad? Cheer up!” And it’s more a chemical thing than a “Why don’t you smile more?” kind of thing. I think it was looked on more as a joke back in the day, and now it’s being taken more seriously, as it should.

Songfacts: Do you think that your father suffered from that, too?

Wolfgang: Anxiety? Absolutely. It’s one of the main reasons why I’m such an anxious person. And it’s why he drank.

Songfacts: Did your father get the chance to listen to all the Mammoth material, and if so, which songs did he enjoy most?

Wolfgang: Yes, Think It Over was his favorite, but he was so proud and happy with all of it. He was the only other person – other than me – to have all the ideas and everything on his phone. He had what would be the album, and then he had about 10 more other ideas that are pretty fleshed out but hit the cutting room floor during the recording process. Those will probably show up on an album in the future.

Songfacts: On A Different Kind Of Truth, which songs did you have the most hand in writing?

Wolfgang: Stay Frosty was an idea Dave brought in that was completely original and not stemming from an older demo, but in terms of structure, I was the one that put it together. It was just this little acoustic ditty, and we were like, “Well, what do we do? We’re not sure.” I was the one who actually structured the entire song on how it would go.

And then there were the more fresher ideas like China Town and The Trouble With Never, which I was really able to insert my own flair into and do the tapping intro with the capo on China Town.

But ideas like that, and You And Your Blues. As Is was a fresher idea. The ideas that were stemming from older ideas were things like She’s The Woman, Beats Workin’, Bullethead, Big River, and stuff like that.

Songfacts: Do you remember if there were any leftover songs from the A Different Kind Of Truth sessions?

Wolfgang: There were not. I don’t know where this rumor came out saying that we recorded like, 60 songs. What’s on the album is everything we recorded. I have no idea where that rumor came from.

There was one song we almost did that we wrote in the studio, but it fell apart before we had the chance to do it. It’s so weird – I see Van Halen fans on Twitter go, “I have the inside track… they recorded like, 60 songs!” And it’s like, “No. No. No.”

Songfacts: What do you consider the definitive Van Halen song?

Wolfgang: I think that’s hard to boil down. I look at the Hagar era and the Roth era as two sides of the same coin, but I think they should be equally viewed and appreciated. I think Fair Warning and 1984, those two albums are really great representations of the Roth era, and I really like For Unlawful Carnal Knowledge and Balance from the Hagar era. But I guess if I really had to pick iconic songs from each era, I think Dreams from the Hagar era, that’s one of the best things my father ever wrote. And for the Roth era, Unchained is pretty f–kin’ awesome.

Songfacts: Largely due to seeing Mean Street performed on the tours you did with Van Halen, it led me to a whole new appreciation of that song.

Wolfgang: Yeah, I love everything off of Fair Warning. Hear About It Later is one of my favorite songs.

Songfacts: While it seems like the primary focus of what made your father such an iconic guitar player was his soloing, he was such a phenomenal rhythm player.

Wolfgang: Everybody focuses on the tapping and the fast stuff, but his real strength was in his rhythm playing and his songwriting.

Songfacts: What was the most exciting Van Halen song to play live?

Wolfgang: I was really stoked in 2015 when we played Dirty Movies. That, and we played Drop Dead Legs. We opened with Light Up The Sky, and we also played In A Simple Rhyme with the outro ending, called Growth. Being able to play those was… YES! It was so exciting to play stuff like that.

Wolgang Van Halen’s debut, self titled Mammoth WVH will be released on June on June 11th via EX1 Records/ Explorer1 Music Group. A pre-order for Mammoth WVH in various configurations – including a recently announced limited orange color vinyl available via the band’s online store – can be found here.

Mammoth WVH will be opening for Guns N’ Roses on select tour dates.