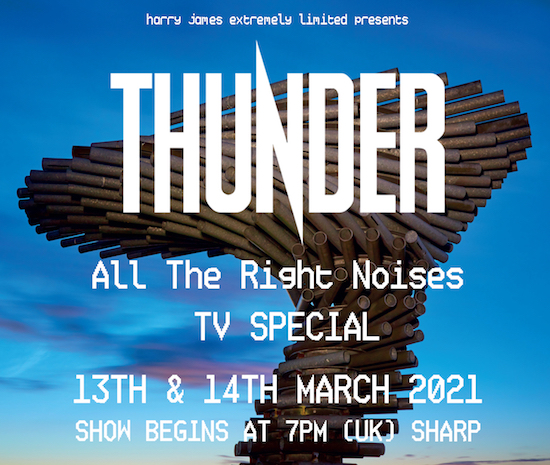 Thunder have announced an online TV special, where they will exclusively perform tracks from their forthcoming album All The Right Noises, as well as some of their classic hits from years gone by.

The show will take place at 2:00 P.M Eastern U.S Time on March 13th 2021 and will be streamed for 48 hours afterwards, enabling ticket buyers to watch as many times as they like during that period.

The live studio performance will be filmed with adherence to Covid-19 restrictions, and will feature collaborators who played and sang on All The Right Noises.

Singer, Danny Bowes says of the forthcoming show, “As soon as we made the announcement to move our arena shows back to 2022, we decided we can’t wait until then to play the new tunes. Fans have been asking us for a streamed gig since the first lock down began, but we’ve resisted until now, because it can’t be a proper Thunder live show without them in the room. The format we’ve come up with will involve our fan club members via video for some of it, so they’ll see us performing, and get to ask us questions too. It’s not the same as a live show, but it’s not meant to be. When the show goes out, we’re hoping it’ll feel less like a gig, and more like a TV show, with us playing these brilliant new tunes, and loads of screaming nutters in their front rooms. What can go wrong?”

For tickets & full info on how to watch, visit: https://thunderband.lnk.to/TVspecialPR.

Thunder Channel (Patreon) fanclub members will also be given exclusive access to watch sections of the filming as it takes place, and take part in a Q&A session with the band via video.

Thunder will release their brand new album, All The Right Noises on March,12th 2021 on BMG. Listen to first single, Last One Out Turn Off The Lights, here.

Listen to the most recent single released from the album, Going to Sin City, below.

GUITARIST TONY IOMMI ON THE DIFFERENCES BETWEEN OZZY OSBOURNE AND RONNIE JAMES DIO, “OZZY WAS MORE OF A SHOWMAN…[RONNIE] WAS MORE A PERFECTIONIST” ›