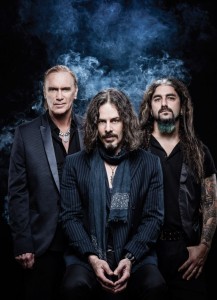 Hot Streak is The Winery Dogs’ appropriately titled, self-produced studio album, which came out today on Loud & Proud Records via RED (a division of Sony Music Entertainment) and in the rest of the world via earMUSIC. It was preceded by the first single, Oblivion, which was released to radio August 25th and quickly made its way onto the Top 30 of the Billboard “Mainstream Rock Tracks” chart. A double vinyl edition of the new album is also in the works and is due out November 13th.

As of October 1st, Hot Streak was sitting at #7 on iTunes’ Pre-Order Rock Albums chart, as well as many of Amazon’s top pre-order lists, including:

Last week, Eddie Trunk—who was instrumental in introducing Kotzen to Portnoy and Sheehan in 2012 when the band was first forming—premiered two songs, Captain Love and Hot Streak, on his weekly Trunk Nation with Eddie Trunk SiriusXM radio show. “The Winery Dogs have taken the incredible precedent for songs and performance set on their debut to the next level with Hot Streak,” Trunk says. “More brilliant stuff from what is easily my favorite new band.”

After playing over 100 shows worldwide in support of their self-titled debut album, The Winery Dogs are eager to head back out on the road to get behind Hot Streak. Their first round of U.S. headlining tour dates will kick off October 3rd in Ridgefield, CT at the Ridgefield Playhouse. Shows around the globe are already being planned for 2016.

Hot Streak shows the powerfully pedigreed trio’s initial burst of collective chemistry was no accident, from the strum and headbang of Captain Love to the propulsive uplifting vibe ofThe Bridge” to the introspective acoustic harmonic convergence of Fire. If these three Dogs thought they captured lightning in a supper dish the first time around, Hot Streak barks ups the aural ante into exciting new territory.

The Winery Dogs on the road: