Episode 8 of season 14 of VH1 Classic’s centerpiece in original programming That Metal Show is the heaviest show of the season as Kerry King of Slayer returns. Kerry sits down with hosts Eddie Trunk, Don Jamieson, and Jim Florentine to discuss the upcoming Slayer album, getting the rust off for the upcoming summer tour, and even reveals some information about material for another record exclusively on the show.

The second guest on the episode welcomes Lzzy Hale of Halestorm to the set for the first time. Lzzy appeared on the show last season via the Metal Modem and talks about the new Halestorm album. They recorded the new album in a church in Nashville all playing together live, something they have never done before.

The episode features the debut of Zakk Wylde from Black Label Society as the guest musician. Zakk has been asked to perform on “That Metal Show” every season and finally in season 14, he obliged. Zakk wowed the crowd with playing abilities while showcasing his new custom audio equipment, Wylde Audio. In a first for the show, Zakk played out the final segment of the show with an extended off-the-cuff solo arrangement.

One of the episode highlights comes in the “Stump The Trunk” segment this week. The audience questions Eddie again, but this time also comes under fire with questions from Zakk himself, Joe Hottinger from Halestorm, and even Ed’s own mother gets a stump in. Take It Or Leave It returns this week with the hosts debating the recent announcement of Skid Row’s new singer and they offer up their favorite new releases in the Pick Of The Week. The TMS Top 5 looks at the Top 5 Zakk Wylde Songs and tracks like Miracle Man, No More Tears, In This River, and Stillborn all find their way in to the discussion. 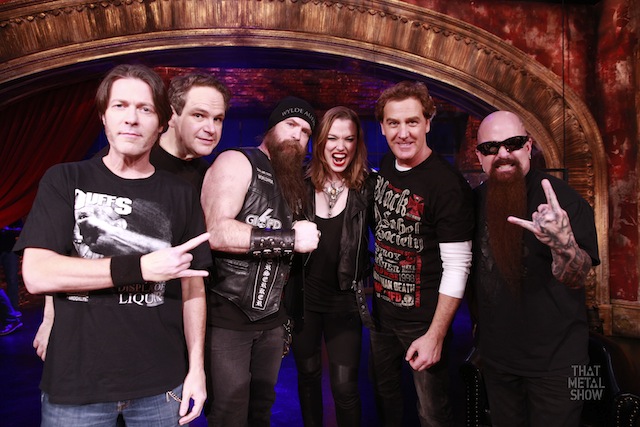