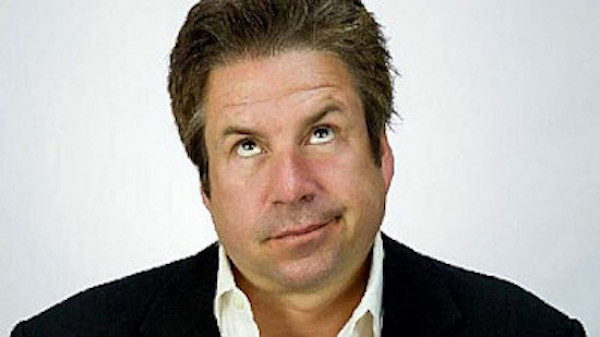 Greg Prato of Songfacts interviewed “Stuttering John” Melendez, formerly of The Howard Stern Show, and The Tonight Show with Jay Leno, about his 2018 memoir, Easy for You to Say, and other topics. Highlights from the interview appear below.

Songfacts: Let’s discuss the Talk My Way Out of It music video, from your 1994 album, Stuttering John. It had some great special guests in it.

Melendez: That was a trip – to get Sting and Gene Simmons in my video was awesome. The only person who was missing was Howard, who in his infinite wackiness – for lack of a better word – decided he couldn’t make an appearance, because as he told me, he might have his own thing going on with MTV…

Songfacts: If you’d like to talk a bit more about the Talk My Way Out of Itvideo – I’d imagine you must have some great memories of filming it.

Melendez: It was so much fun. Barry Williams did it as “Greg Brady/Johnny Bravo,” and Gene Simmons, Sting, Gilbert Gottfried, Nuno Bettencourt of Extreme, Grandpa Al Lewis, Gary [Dell’Abate, aka “Baba Booey”], Jackie, and a lot of the wack packers like Kenneth Keith Kallenbach and Melrose Larry Green. Even the chairman of Atlantic, Craig Kallman.

I remember Gene and I went out that night to Scores – the strip club – and hung out. I picked up one of the girls in the video, the one who in the video I say, “You’re in,” and she says, “I’m in the band?”, and I say, “No, in the bus.” I ended up hanging out with her and we ended up back at Gene’s hotel room. I remember my girlfriend at the time was on the phone, and she was going, “Where’s John?” She was calling Gene Simmons’ hotel room, and Gene had to lie to her, and say, “I don’t know! Uh… he was just here.”

Songfacts: In support of the Stuttering John album, you also opened shows for the likes of Ozzy, Mötley Crüe, Ted Nugent, and Collective Soul.

Melendez: I tell two funny stories about Ozzy. Opening for him was awesome. And we were backstage with Ozzy, all smoking weed, and I’m videotaping everything. And then like, a week after the gig, I bring my friends over to watch the video. We turn it on, and it’s my kid on a swing – my wife taped over the whole f–king video.

The other thing is, after my band was done and Ozzy was on stage, I went onto the rafters to watch him from above. There was a black curtain, so I decided to pull away the curtain. I did, and it’s this guy with a microphone, singing all of Ozzy’s lyrics. He’s like, “Close that curtain.” It was like The Wizard of Oz.

It’s sad, but look, Ozzy’s up there in years, so he needed someone to sing, because he probably can’t do it anymore. But Ozzy was a great guy. [This isn’t the first time that someone has alleged that Ozzy utilizes another singer in concert- – Robert Mason once spilled the beans to Eddie Trunk.] .

Collective Soul couldn’t have been a nicer band. We opened for them in I think Tallahassee or Jacksonville, Florida. I’ll never forget it, because we were midway through our set, and we blew the transformer. It was an outdoor concert. They took an hour-and-a-half break to fix this transformer, and Collective Soul let us go back on stage and finish our set! They were really cool.

But those were the days, man. I miss the life of a rock star. I mean, I was getting girls… two at a time, two in one night. I’m thinking to myself, “Man, if I’m getting this and I’ve only sold 50,000 albums, what the hell is Pearl Jam getting?”

Songfacts: What are some memories of working with Howard’s band, The Losers?

Melendez: I wrote a song with Howard that I called Skunk. The name was Skunk, but the lyrics were, “You get me high, get me high.” It was a really good song – Howard came up with the keyboard part, and I wrote the melody and lyrics. Later on, Howard – in his usual fashion – said that Fred [Norris] had something to do with it. But Fred had nothing to do with it.

But it was fun. It was a fun time. It was kind of cool that I was in the band – it was me, Howard, Fred, and Scott [Salem, aka “Scott the Engineer”] on drums. I was part of a band, so it was definitely a good time…

Songfacts: When was the last time you had correspondence with Howard?

Melendez: Just what I talk about in the book – when I was at his house in the Hamptons. I think that was the last time.

Songfacts: Are you in regular contact with any others from The Stern Show?

Melendez: Well, I’ve got my list of moles over there – that’s how I got a lot of the information about a lot of things in the book. I still talk to a few of them. I talk to Robin every now and then. Gary every now and then. I’ve kind of stopped talking to Gary, because I heard from someone that Gary can’t stop trashing me every time he’s in the studio with Howard. It kind of turned me off to Gary. But I don’t hate Gary – I think he has a tendency to lie, and he has to cover his ass. But that’s Gary.

Songfacts: Would you ever go back on Howard’s show if you were invited?

Melendez: I would go back, but he would never have me. There’s no way he would allow me on the show. Especially not to plug this book, because it doesn’t always portray him in the light that he probably sees himself as. But it’s very honest from my experience in what I had to deal with there.

Songfacts: What were some of your favorite celebrity interviews for Howard?

And then I could go with the funny ones, where I got strangled by Lou Reed by asking him if he still masturbated. And judging by his grip, he does.

I got punched by Raquel Welch by asking her, “Are they drooping yet?” She hit me with a left.

I asked OJ [Simpson] if he would sign my knife – and coincidentally, he brought his own.

The best response I ever got was by Joan Rivers. I asked her if ugly people should be allowed to have children, and she said, “No! I told your mother that!”

‹ MASTODON GUITARIST SAYS JUDAS PRIEST IS NOT A HEAVY METAL BAND, BUT A CLASSIC ROCK BAND