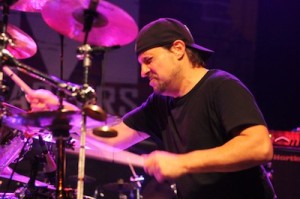 Slayer drummer Dave Lombardo has just given a clue into the band’s business dealings and internal turmoil. One week ago, on Valentine’s Day, Lombardo was notified by the band’s lawyers that his services would no longer be needed for Slayer’s upcoming Australian tour dates. Lombardo has detailed the sudden decision in an official statement.

“I want to personally apologize to all of our fans in Australia who have bought tickets for the tour expecting to see me in my usual place on the drums.

So that you all know the truth, as of the end of the business day on February 14th, I was notified that I would not be drumming for the tour in Australia. I’m saddened, and to be honest I am shocked by the situation.

Last year, I discovered 90% of Slayer’s tour income was being deducted as expenses including the professional fees paid to management, costing the band millions of dollars and leaving 10% or less to split amongst the four of us. In my opinion, this is not the way a band’s business should operate. I tried rectifying it by letting my band mates know, and Tom and I hired auditors to figure out what happened, but I was denied access to detailed information and the necessary back up documents.

I spent the Christmas and New Year holidays realizing I had toured all over the world in 2012, but yet, had not been paid (except a small advance) or provided a proper accounting for a full year’s sweat and blood. On top of this, I was told that I would not be paid until I signed a long form contract which gave me no written assurance of how much or on what basis management would deduct commissions, nor did it provide me access to the financial budgets or records for review. It also forbade me to do interviews or make statements having to do with the band, in effect a gagging order.

Last Monday, I sat down with Kerry [King] and Tom [Araya] to rehearse for Australia and to propose a new business model that I felt was the best way forward for Slayer to confidently protect itself so we could do what we do best . . . play for the fans. Kerry made it clear he wasn’t interested in making changes and said if I wanted to argue the point, he would find another drummer. On Thursday, I arrived at rehearsals at 1 pm as scheduled, but Kerry did not show. Rather, at 6:24 pm I received an email from the lawyers saying I was being replaced for the Australian dates.

I remain hopeful that we can resolve our issues. But once again, I sincerely apologize to all of our fans in Australia who spent their money expecting to see the 3 of us original Slayer members.
I look forward to seeing you in the future.

As for Lombardo’s replacement, according to a Tweet from Soundwave Festival promoter AJ Maddah, Jon Dette will be the replacement drummer for Slayer while the band is in Australia. Dette was the band’s drummer in 1996 and 1997.

It was also recently revealed that Dette would be filling in for Anthrax‘s Charlie Benante for the same Australian Soundwave shows, after Benante was forced to take a break due to “personal issues.”

As far as the future of Slayer is concerned, the band is working on a new album, but with guitarist Jeff Hanneman still recovering from a spider bite and Lombardo being kicked off the Australia tour, things seem up in the air right now. We’ll be sure to keep you updated as news on the Slayer situation continues to break.