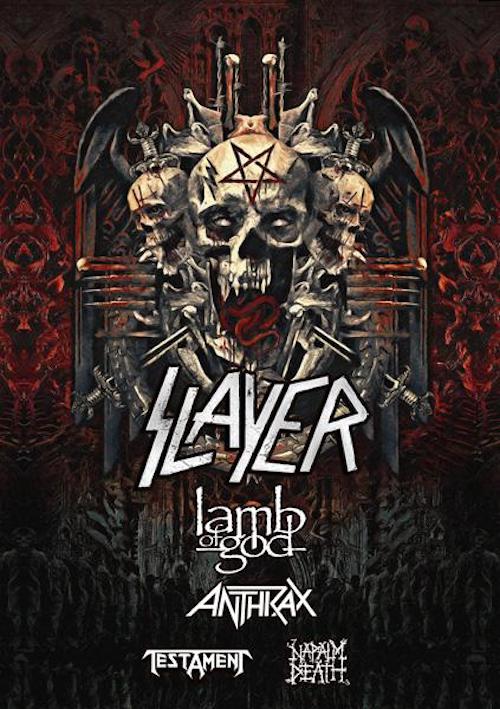 Literally by popular demand – with more than half the tour dates already either completely sold out or a sell-out imminent – today Slayer announces Leg Two, North America, of its final world tour, set to begin on Thursday, July 26th at the Bank of New Hampshire Pavilion in Gilford, NH. The tour will travel to 20 cities over about five weeks, culminating at San Jose’s SAP Center on August 26th. Lamb of God, Anthrax, Testament and Napalm Death will accompany the band on all dates. The general ticket onsale for most dates begins this Friday, March 9th at 10AM (local). Very limited Slayer onstage + Meet & Greet + exclusive merchandise packages will be available. Log on to slayer.net. for all ticket and package purchasing information.

A second North American leg for this tour had been considered to take place at some point down the line, but within 48-hours of the initial January 26th ticket on sale date, that all changed.

“We were blown away by the speed of sales for the final run,” said Rick Franks, President of Touring for Live Nation, one of the tour’s promoters. “Thirty-six years later and Slayer is bigger than ever before.”

On January 22th, Slayer announced that it would do one last concert tour around the globe to thank their fans for all of their support over the years, for making the last three-and-a-half decades so packed with good times and unforgettable experiences, and then move on.

New and previously announced dates for Slayer’s final world tour, North America Legs One and Two, are as follows:

MICHAEL SCHENKER DISCUSSES HIS CAREER AND SAYS, “I WAS SHOCKED WHEN I FOUND OUT HOW MANY GUITARISTS NAMED ME AS A FAVORITE GUITARIST” ›