Citi is the official credit card of the World On Fire Tour, and Citi cardmembers will have access to pre-sale tickets through Citi’s Private Pass Program beginning Tuesday, July 14th. For complete pre-sale details, visit www.citiprivatepass.com. The regular on-sale for tickets will begin on Friday, July 17th.

Last month, Slash and The Conspirators released Live At The Roxy 9/25/14, the live concert on DVD, Blu-ray, 3LP, 2CD through all major retailers and digital formats simultaneously via Eagle Rock Entertainment and onlineas a BitTorrent Bundle, (here).

Shortly after the release of their current World On Fire album–Slash’s third straight solo album to debut in the Top Ten in the U.S and the second album with his official band The Conspirators–the iconic American rock guitarist, songwriter and film producer Slash took the stage with his band The Conspirators at the legendary Roxy Theatre on the Sunset Strip in West Hollywood, CA. A staple of rock history that helped birth countless bands, including Guns ‘N’ Roses, the atmospheric venue gave fans a brilliant opportunity to see the band up close as they delivered a set packed with recent solo tracks, including several from the new album World On Fire, and classics from Slash’s days with Guns N’ Roses and Velvet Revolver: Ghost, Back From Cali, World On Fire, Sweet Child O’ Mine, Anastasia, Paradise City, Slither, Nightrain and many more. The intimate setting inspired the band to deliver a scintillating, dynamic performance that is brilliantly captured on Live At The Roxy 9/25/14. Slash’s guitar prowess paired with the raw energy of Myles Kennedy & The Conspirators proves a truly potent live force and Live At The Roxy 9/25/14 sets the benchmark for high octane rock n roll shows.

Recently, Slash and his band partnered with IFAW, the International Fund for Animal Welfare to raise awareness of the slaughter of elephants which is leading to their early extinction. To read more about about this, please click here. 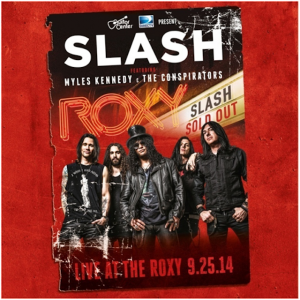 ‹ NEW BOOK, “SURVIVAL OF THE FITTEST: HEAVY METAL IN THE 1990’s,” TELLS THE STORY OF ONE OF THE GENRE’S MOST DIFFICULT DECADES