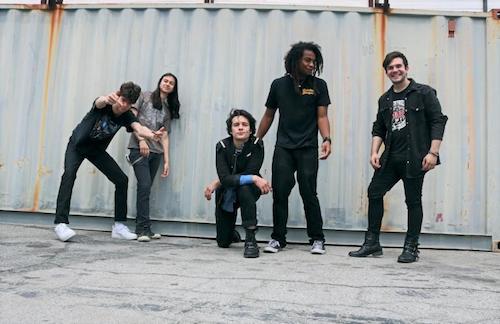 Emerging with a fresh and fiery sound, style, and spirit all their own, raucous rock ‘n’ roll upstarts Classless Act will descend upon Los Angeles for their first-ever performances this May. Founded in 2016 by 15-year-old childhood friends London Hudson (drums), who’s the son of Slash, and Nico Tsangaris (lead guitar), the band’s lineup is rounded out by Derek Day (23, lead vocals), Dane Pieper (20, rhythm guitar), and Franco Gravante (21, bass).

The Southern California quintet will make their live debut this Sunday, May 6th when they take the stage at the fourth annual Ride For Ronnie concert and motorcycle ride presented by the Ronnie James Dio Stand Up and Shout Cancer Fund. They join a high-profile bill headlined by Steven Adler’s All Star Band, Dio Disciples, Lynyrd Skynyrd tribute act One More From the Road, Railgun and Beastö Blancö.

Slash says, “The annual Ride For Ronnie event is a great collective effort for a great cause supporting cancer research and prevention, and with great live music and motorcycles, you can’t go wrong. It’s especially cool this year as my son’s band, Classless Act are performing. Stand Up and Shout.”

Next up, Classless Act will serve as direct support to Adler’s Appetite at a sold-out Whisky-A-Go-Go gig on Thursday, May 10th. They’ll bring unbridled energy, powder keg passion, and one anthem after another to this hallowed Sunset Strip stage. Handpicked on the bill by iconic Guns N’ Roses co-founder and Adler’s Appetite namesake Steven Adler, the show promises to be just one of many unforgettable milestones for the band in 2018.

“I love their music,” shares Adler. “It reminds me of a 21st century Guns N’ Roses, Aerosmith, and Lynyrd Skynyrd. I just love all three of those bands. They sound great. I’m a real rock and roller; they’re a real rock ‘n’ roll band. I hope we get to do more shows together!”

Armed with songs like Pass The Medicine, God Damn Devil, Classless Act and Madhouse, Classless Act stand ready to carve out a legacy of their own. Calling legendary Guns N’ Roses and Velvet Revolver guitarist Slash “pops,” London certainly has music coursing through his DNA. However, the drummer aimed to build a legacy of his own and suggested to childhood buddy Nico they launch a band in 2016. Together, they rallied around a shared “sole purpose of creating kickass rock ‘n’ roll.” As London and Nico wrote countless songs, the boys invited Dane, Franco, and Derek into the fold as the identity solidified inspired by Guns N’ Roses, Queen, Led Zeppelin, Aerosmith, and Motorhead.

London describes it best, “There isn’t a feeling that compares to playing music with these guys. Every time we get into a room together, it’s just so comfortable and natural. We all come together to make kickass rock ‘n’ roll and to have fun while doing it. It’s such a raw experience that I wouldn’t trade for anything else. I love this band.”

The name definitely captured a relentless and reckless spirit.

“I remembered Donald Trump being called a classless act, and I immediately thought, ‘That would be a great band name’,” recalls Nico. “It fits the sound. It’s hard and heavy rock ‘n’ roll that incorporates many flavors from different styles of music.”

For as much as they uncork raw youthful energy, Classless Act also recognize their roots. It’s the perfect cross-section of sounds.

“It feels quite different and it feels like something new,” says Derek. “From that, I’d say it feels like I’m a part of something that will bring back a power that was long forgotten–simultaneously bringing up a new way to hear a sound. It’s really great!”

About his bandmates, Franco states, “Playing with these guys is one of the most incredible and happiest experiences in my life.”

Dane agrees, “Everyone has a purpose in the band and everyone contributes to their own unique sound and style, which makes the journey all the more invigorating and incredible.”

Ultimately, this Act is about to vault to the head of the class…

HOW BON JOVI STAYS RELEVANT WITHOUT LOSING ITS ROOTS ›