Although it’s said you can never go home again, Slash featuring Myles Kennedy and The Conspirators have announced that today (July 31st) they’ll celebrate the release of their new album World On Fire by returning to the iconic guitarist’s stomping grounds with a series of three one-night-only club shows: September 23rd (The Troubadour) and then, moving up the hill to the world-famous Sunset Strip, September 25th (The Roxy) and September 26th (The Whisky A Go Go).

These gigs will amp up the excitement around World On Fire–out September 16th on Slash’s own label Dik Hayd International, distributed through Caroline–and honor the 50-year anniversary of the beloved musician retailer Guitar Center. Tickets for all shows go on-sale August 1st at SlashOnline.com.

“We’re excited to unleash World On Fire in a big way and be a part of Guitar Center’s 50th celebration,” says Slash. “They’ve been really supportive of me since the very beginning on the Sunset Strip.”

Fans can be a part of history as Guitar Center will present SLASH featuring Myles Kennedy and The Conspirators “Live From the Roxy,” to be broadcast on national television on DIRECTV’s Audience Network (Ch 239) November 9th at 8pm. The 90-minute full rock concert will be filmed in stunning 4k and 5.1 surround sound. Fans can enter to win a VIP trip for two to see The Roxy show and take home an Epiphone Les Paul signed by the legendary guitarist, visit guitarcenter.com/slash to win.

World On Fire marks Slash’s fastest-climbing song at radio ever; the album’s hell-raising first single hit the Top 10 this week. Watch the fun NSFW video below.

The World On Fire disc marks Slash’s third solo offering and second album with his official band The Conspirators which features Myles Kennedy (vocals), Brent Fitz (drums) and Todd Kerns (bass). For World On Fire, Slash and the band worked with producer Michael “Elvis” Baskette (Alter Bridge, Falling In Reverse, Incubus) to create a powerful new turn for the band in 17 songs. World On Fire is the follow-up to 2012’s Apocalyptic Love which debuted at #4 on the Billboard Top 200 chart and earned Slash two No. 1 U.S. rock radio hits–his first-ever solo–with You’re A Lie and Standing In The Sun. Slash officially began recording as a solo artist with his self-titled 2010 debut album which employed a different vocalist on each track of his first album including Ozzy Osbourne, Fergie and Myles Kennedy among others.

Slash featuring Myles Kennedy and The Conspirators are currently on their summer tour with Aerosmith in addition to select solo dates, see full itinerary below. The group rocked a packed house at The Forum in Los Angeles last night (July 30th). For all dates and tour ticket packages, visit slashonline.com/tour. Check out the set list from The Forum show below:

Slash featuring Myles Kennedy and The Conspirators set list from The Forum in Los Angeles 7.30.14:

Slash featuring Myles Kennedy and The Conspirators on tour: 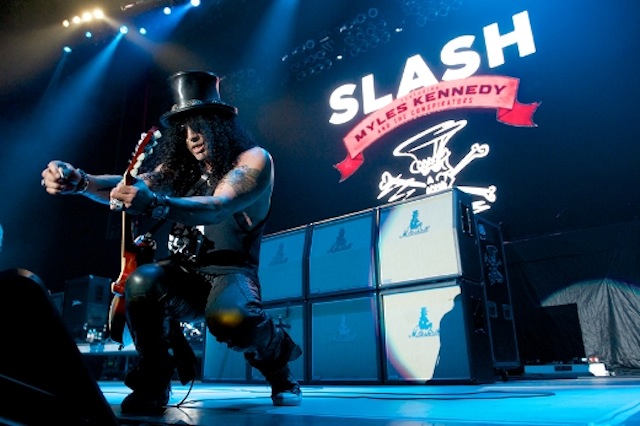