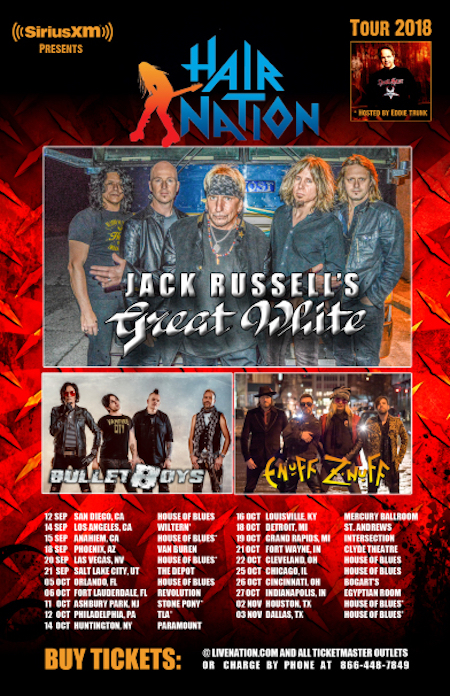 SiriusXM announced today (June 4th) that SiriusXM and Live Nation will present The Hair Nation Tour featuring Jack Russell’s Great White, BulletBoys, and Enuff Z’Nuff. The 21 city U.S. tour will begin on September 12th at House of Blues San Diego. The tour offers listeners and music fans across the country the chance to see the bands who have been giving us decades of larger-than-life rock music.

The tour will be hosted by music industry veteran, author, and SiriusXM host Eddie Trunk, who will be appearing in person at some of the tour dates. One of the most respected personalities in all the worlds of rock music, Trunk has achieved widespread acclaim as a broadcaster and interviewer on radio and television. Eddie Trunk’s Trunk Nation show airs on Hair Nation (SiriusXM channel 39) as well as on VOLUME (SiriusXM channel 106).

‹ POISON DRUMMER RIKKI ROCKETT ON HOW THE BAND SURVIVES ON THE ROAD, “WE HAVE SEPARATE BUSES, SO WE GET ALONG JUST FINE”

THE NEW BREED OF RATT TO RELAUNCH WITH PEARCY AND CROUCIER, SOME TOUR DATES ANNOUNCED ›