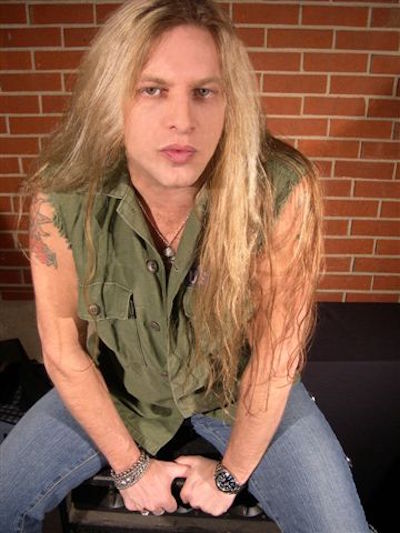 Sleaze Roxx: You have a great new record Beyond the Fade. I imagine the response has been pretty good to it?

Ted Poley: Thank you for saying that about the record. The reviews have been awesome and I had signed copies of the album through my site and we sold them all in record time. I wanted to do something for the hard core fans that wanted a signed copy. I thought those would last for a couple weeks, but we sold out in two days [laughs]. I think it’s driven by the positive reviews and the videos that Frontiers has released. It’s been awesome.

Sleaze Roxx: While I have you on the phone, I would be insane not to ask you some Danger Danger questions. What are some memories you have about recording the debut record? Sadly, the band issued the debut and follow up right before the changing of the guard.

Ted Poley: That was magical. It was my first “big” record deal. We all lived in a condo in New Jersey where we were recording the album. The songs were very cool. If you’ve heard the demos, the versions that made the record were very close to the original demos.

Like you said, we came out at about “a quarter till grunge.” About 15 minutes after we came out, everyone was wearing flannel and goatees [laughs]! That was that. They flicked the “off” switch and that was that and it was over. I have no regrets. It was a really special time. I really like that first record. We worked with Lance Quinn who had worked with Bon Jovi. As a matter of fact, Obie O’Brien who was one of Bon Jovi’s engineers stopped by the studio and he told us that [Jon] Bon Jovi liked the studio so much that he bought it [laughs]! Thankfully, he allowed us to finish recording the album before he moved all the (recording) equipment into his house [laughs]!

I do think we were the last band to record there. After we were done, they moved the mixing board into his basement. Obie actually asked me to come with him to Jon’s house because he was in the basement framing it in preparation for the equipment to be moved in. Obie says “Hey Ted you wanna go to Jon’s house?!” I said “Yeah, I would love to go to Jon’s house!” [laughs] Oh, that was so awesome because it was at the peak of “Jon Bon Jokiness.” It was surreal. Obie was close to Jon so we get to the gate. The gate opens, we walked through the property through the garage. I saw Jon’s vintage and sports cars and then got to see where the studio would be.

There was Jon walking around barefooted and he was the nicest guy you could ever meet! He bought us lunch from an Italian restaurant and he stuck me in his office and played me the New Jersey album which they’d just completed. It was the ultimate Bon Jovi experience thanks to Obie O’Brien. Little did I know what was coming! [laughs].

Sleaze Roxx: I remember the videos for the debut getting regular rotation on Dial MTV. How did that feel like? I can’t even begin to imagine what that’s like?

Ted Poley: I f–king miss that s–t! [laughs hysterically] That was the best! I’m not going to bulls–t you man. That’s everything you ever wanted.

Sleaze Roxx: Any memories of the Screw It record?

Ted Poley: When we did that record, it was the beginning of the musical shift. By the time we set out to record the Cockroach record, we were there. We spent a lot of money on that Monkey Business video. [laughs] We should have invested that on an apartment building! We spent somewhere in the area of two to three hundred thousand dollars on that video. I might have seen it played 2-3 times on MTV at three in the morning. It’s an awesome video for its time but honestly an apartment building would have been a better investment! [laughs]

We used Erwin Musper who gave us a little less slick of a sound. Lance [Quinn] gave us an early Bon Jovi like sound. I don’t know that it was a “conscious” decision to move to a different sound at the time. I couldn’t have cared less. I was too busy getting laid. [laughs] Don’t get me wrong, I’m a musician, but there was a lot going on at the time to keep me occupied.

Sleaze Roxx: Last thing, have you ever approached by an established band to audition to be their vocalist?

Watch video’s for the songs Let’s Start Something and Higher, from Beyond the Fade, below.