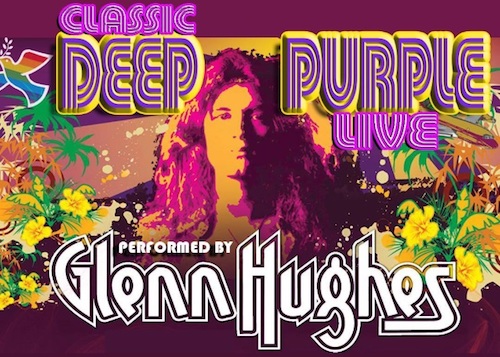 Glenn Hughes, former bassist and singer of Deep Purple, known to millions as the “voice of rock,” Rock And Roll Hall Of Fame inductee, and the current frontman for rock super group Black Country Communion, has announced that he will perform Deep Purple-only material with his Classic Deep Purple Live nationwide U.S. tour in August-September 2018.

The tour promises to be dynamic, a turn-back-the-clocks, two-hour live extravaganza homage to his tenure in MK 3 and MK 4 incarnations of Deep Purple — one of music history’s most seminal and influential rock and roll groups.

Comments Hughes, “I’m excited to be touring the Classic Deep Purple Live in the U.S. late this summer. I first toured Classic Deep Purple Live in Australia and New Zealand last year and it went down like a storm. We’re also touring the show throughout South America in April, and international festivals throughout the summer. By the time we tour the U.S., then the U.K. in October, we’ll be on fire.”

A second leg of the USA tour will added soon, with further shows throughout November and December.

‹ FORMER MEGADETH DRUMMER NICK MENZA TO BE REMEMBERED AT A SPECIAL EVENT IN HOLLYWOOD, CA ON APRIL 22ND

BLACK STAR RIDERS’ DAMON JOHNSON DISCUSSES GOING ON TOUR WITH JUDAS PRIEST AND SAXON, ALSO WHY THE BAND IS HAVING A TOUGH TIME BREAKING IN AMERICA ›