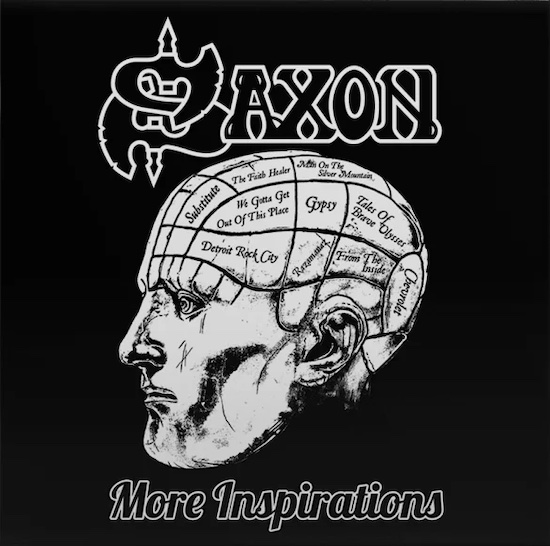 Saxon unveiled the first single, The Faith Healer, from their upcoming album, More Inspirations, which is scheduled for release on March 24th through Silver Lining Music.

Following the release of Inspirations in 2021, More Inspirations is the second “deep dish” serving of the influences which have fed the mighty Saxon’s immensely successful 40-plus-year career. The first single is an astonishing take on The Sensational Alex Harvey Band‘s The Faith Healer.

Frontman Biff Byford comments, “We used to see The Sensational Alex Harvey Band play this back in the day, they started the set with it, such a fantastic song and fantastic band… big influence.”

The “making of” video for The Faith Healer, directed by Jay Shredder, can be seen below.

Whether getting feral with The Animals‘ We’ve Gotta Get Out Of This Place, letting loose a high-octane take on Alice Cooper‘s From The Inside, or laying down a ferocious tribute to KISS‘s Detroit Rock City, More Inspirations is a joyous trip into the sounds which galvanized the Barnsley boys and continue to get spun on home stereos and tour buses.

Produced by vocalist/co-founder Biff Byford, with Seb Byford helping record the music alongside mixing engineer Jacky Lehmann, More Inspirations also includes enthusiastic takes on Rainbow, ZZ Top and Cream, as well as a thunderous Razamanaz by Nazareth, a tasty take on The Who‘s Substitute, and a thick groove take on Uriah Heep‘s Gypsy. Whether this is your first dance with such classic songs, or you’ve come to see where Saxon was born, More Inspirations delivers the goods and then some.

1. We’ve Gotta Get Out Of This Place
2. The Faith Healer
3. From The Inside
4. Chevrolet
5. Substitute
6. Gypsy
7. Man On The Silver Mountain
8. Detroit Rock City
9. Razamanaz
10. Tales Of Brave Ulysses

Originally from South Yorkshire, England, Saxon has gone on to sell about 23 million albums and has produced such classic songs as Denim And Leather, Princess Of The Night, Wheels Of Steel and Power And Glory.

‹ BRET MICHAELS RELEASES NEW SINGLE/VIDEO “BACK IN THE DAY,” HITS THE ROAD THIS SUMMER WITH “PARTY GRAS” TOUR DATES