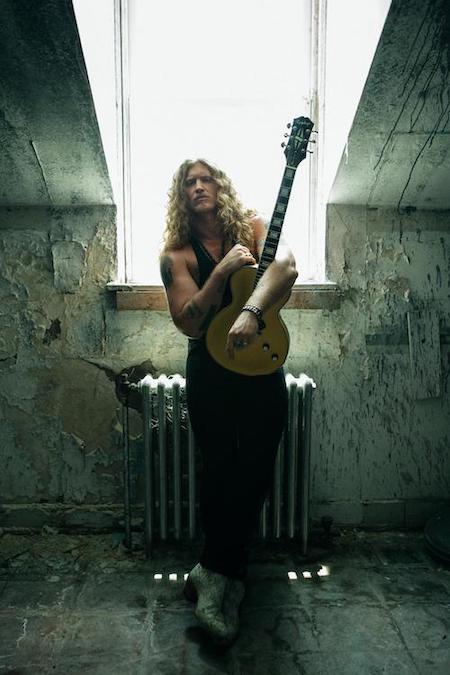 “The one aspect that really excites me about music is live performance. I live to be in the moment on stage, playing music and connecting with the listener,” shares Nichols. “When it was time to make my latest record, that was the biggest goal for me. I wanted to BE the music, take the listener on a sonic journey, and ultimately put my stamp as an artist to record. I cannot wait to tour this album, what you hear on record is exactly what you’ll get in the flesh. These songs were made to be played live and played loud.”

The recording sessions for Jared James Nichols, which was recorded live in the studio at Blackbird Studios and Sienna Studios to reflect the spirit of his electrifying live show on tape like never before, occurred at a pivotal moment for Nichols, who almost never performed again as he had been sidelined only a few months earlier with a broken arm. After surgery, which left him with a plate and 16 screws in his right arm, he pushed himself with diligence and determination to regain use of his arm and his storied guitar proficiency. Nichols soon paved the way for the record with the hypnotic and hyper-charged Hard Wired, released in the spring of 2022. Born from a jam session with Tyler Bryant and Graham Whitford, the single bulldozed a path for Jared James Nichols with no shortage of raw and raucous six-string bravado. From the jump, the album kicks into high gear with the bluesy wallop of My Delusion followed by the foot-stomping and unrelenting rock & roll animal Easy Come, Easy Go. On the hard-hitting lead single Down The Drain vulnerable vocals snake around melodic guitar in ominous fashion and then snaps into a chantable chorus punctuated by a wailing lead. Since its release in the fall, Down The Drain has received critical praise from the likes of Guitar World, Classic Rock Magazine, and Loudwire, the latter of which also included the track in their Best Rock Songs of 2022 playlist, as well as featured placements across DSP playlists including Tidal’s Guitar Gods (as the cover artist) and Rising: Indie/Rock, Spotify’s Modern Blues Rock, and Apple Music’s New In Rock and Breaking Hard Rock. Elsewhere on the 12-track collection is the Black Sabbath-inspired Hallelujah, where a flurry of drums gives way to a thick and heavy battering ram of a blues riff only to crash into a rickety bass line and atomic shredding, and the party homage Good Time Girl. Jared James Nichols culminates on the emotionally charged Out Of Time, his heartfelt and tearful tribute to his late father. See below for full track listing.

Nichols, who appeared yesterday at the Gibson Garage in Nashville for a special pre-release event, will officially celebrate the release of Jared James Nichols with five live shows across the U.S. this month starting next January 17th at The Basement East in Nashville, featuring a handful of special guests including Judas Priest’s Richie Faulkner, Lynyrd Skynyrd’s Peter Keys, Shinedown’s Zach Myers, and more. Then, Jared and his bandmates will head to Los Angeles to perform at The Peppermint Club on January 19th and also stop in Fresno, Chicago, and his hometown of Milwaukee for headlining gigs before making their way to Europe for a just-announced run of tour dates in February. See below for full list of upcoming tour dates. Tickets for all shows are on sale now – go here for more information and to purchase.

With nothing more than a Gibson Les Paul slung over his shoulder, a warm amp turned all the way up, and a hot microphone on and ready, Jared James Nichols churns out the kind of rock that rips, roars, and rolls without filter or apology. Nichols, who stands at a staggering 6 foot 5 inches tall, delivers a one-two punch of gritty vocals straight from the gut and incendiary fret fireworks. Jared first emerged onto the scene in 2015 with his debut Old Glory & The Wild Revival and followed that up with Black Magic in 2018, which yielded the fan favorite Honey Forgive Me. More recently, he issued the Shadow Dancer EP (2021) and collaborated earlier this year with both Maggie Rose and Joe Bonamassa for revised versions of his song Threw Me To The Wolves. Gibson also formally welcomed Nichols as an official ambassador, plotting the release of several signature Jared James Nichols guitars. Since his debut, Nichols has racked up millions of streams and critical acclaim and, in between show-stopping solo shows, has performed alongside icons such as Slash, Billy Gibbons, Zakk Wylde, and even the late Leslie West, to name a few. Guitar World has attested, “If you’ve never witnessed Jared James Nichols onstage, let us say right now: you’re missing out, big time.” By keeping it simple, Jared remains primed to leave his imprint on rock ‘n’ roll forever.