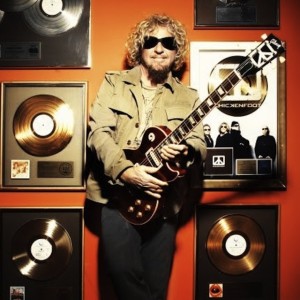 Earlier this month, Sammy Hagar bumped into Metallica frontman James Hetfield. “The first thing he said was, ‘Is it true?” says Hagar. “I said, ‘What?’ He goes, ‘That you guys [in Van Halen] are getting back together.’ I said, ‘News to me. I’m not one that goes around hush hush. I’ll tell you whatever I know.’ He goes, ‘You’re kidding.’ I told him, ‘I’m telling you straight up, James. I don’t have a clue.'”

Hetfield had apparently picked up on the same Van Halen rumors that have been flying around the Internet for months, namely that David Lee Roth has once again left Van Halen and the group is ready to reunite with Sammy Hagar. The rumors appear to be based on very little other than David Lee Roth agreeing to play a few songs with his Eat ‘Em and Smile solo band late least year, an unusually frank Eddie interview where he admitted he has virtually no offstage relationship with Roth, a brief Twitter exchange between Eddie and Hagar and a general sense that last summer’s Van Halen tour was a bumpy ride. But Hagar and Michael Anthony have dates with a reunited Chickenfoot this year and are touring with The Circle, and they’ve had no offline communication with Eddie Van Halen since the 2004 reunion tour wrapped.

All that said, Hagar – who ripped into Eddie Van Halen last year in a profanity-laden web video when he insulted Michael Anthony’s bass playing in a Billboard interview – says he had an epiphany shortly before New Year’s regarding the situation. “I realized that I didn’t want to take any enemies to my grave,” he says. “If I K.O. tomorrow, I don’t want to have an enemy. I don’t know how the afterlife works, but I’d just as soon not go there with any enemies.”

The back-to-back deaths of David Bowie and Glenn Frey in the new year only made him feel stronger about it. “I’ve never seen so many guys from my era K.O. like that,” he says. “Bowie was my hero. It was one after the other, even a young guy like Scott Weiland. He inducted me in the Rock and Roll Hall of Fame. You just go, ‘Aw, man!'”

[Even though Hagar tweeted birthday wishes to Eddie Van Halen], the singer says he will not be the first one to reach out. “It would be misinterpreted,” he says. “I know the way those guys think. ‘Oh, he wants something! He wants back in the band. He must be broke.’ I’m sorry, but unless they’ve changed drastically, which when I’ve talked to people that do know them it sounds like they haven’t changed at all, it would be misinterpreted. I also don’t want to provoke that. That’s not what I’m looking for in my life now.'”

But if they did reach out, Hagar says he’d be quite amenable to a get-together. “I’d say, ‘Fuck yeah, let’s get some coffee,'” he says. “If I did it myself I’d be way too vulnerable. I’d be in a room with the guys like, ‘No, no. You don’t understand. That’s not what I’m talking about. I just want to be friends. And once we’re friends, we can do anything. Until that is proven, I can’t be in a band with you guys, or whatever.'”