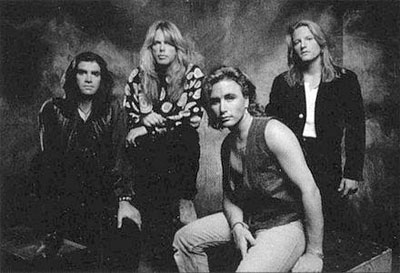 21 Guns’ 1992 album Salute has been reissued by Rock Candy Records. The album, featuring 24-bit remastering, a 4000 word essay about the making of the album, new interviews with the band, enhanced artwork and photos spread out over a 16 page full color booklet, is available for purchase at ww.rockcandyrecords.co.uk.

There’s no getting away from the fact that Thin Lizzy were one of the most influential rock bands of all time. Lead guitarist Scott Gorham was, of course, an essential part of that outfit, carving out a reputation on a string of spectacular albums with his spellbinding guitar playing. After the demise of Thin Lizzy, Scott cooled his engines and spent some time planning for the future, which eventually led to the formation of 21 Guns, a band fit for purpose, boasting both precision and power.

Originally released in 1992, all would have been well and good if only the grunge revolution wasn’t in full swing. With their melodic and polished sheen 21 Guns were ostracized by some quarters the media for sounding dated and being part of a musical heritage that was now rapidly becoming passe. Of course, with the benefit of hindsight we can clearly see that ‘Salute’ was one of the finest rock albums of any era, allowing Scott Gorham to unleash stupendous guitar work and spectacularly crafted songs.

Watch the band’s video for Knee Deep below.

‹ THE WINERY DOGS POST A VIDEO FOR THEIR SONG “I’M NO ANGEL” ONLINE, WATCH IT HERE