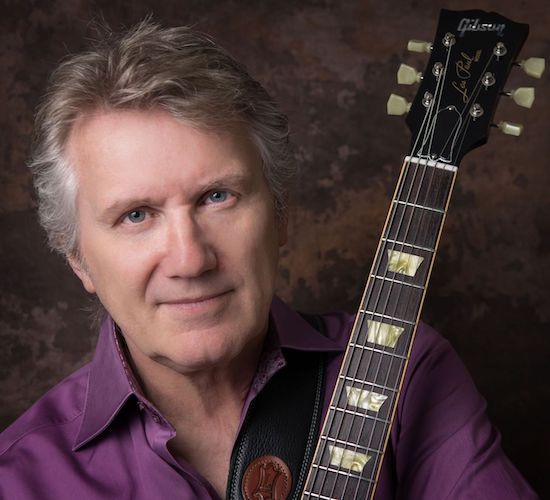 Greg Prato of Songfacts spoke with former Triumph guitarist Rik Emmett about his picks for the five greatest guitar riffs in rock history, amongst other topics. excerpts appear below.

1. Chord head for All Along The Watchtower by Jimi Hendrix. Still the greatest guitar recording that ever made the Top 40. A legendary guitarist making a defining statement. Plus, the epic transfigured Biblical setting of a Bob Dylan song? As good as it gets.

2. Going to cheat here and quote three at once: [A] Clapton [B] Page [C] Beck. The Yardbirds alumni. I will also go personal on this, rather than trying to interpret universality (although they are closely linked, if I may be so bold):

A) Clapton – Steppin’ Out, from the Blues Breakers album. The tone. The confidence. The pure roar of the blues legacy pulsing in every note. This is where “riffing” became crystallized in my teenaged mind.

B) Page – How Many More Times from Led Zeppelin I. Could there be anything heavier and sexier on a guitar than a low open E riff from Jimmy Page? No, there could not.

C) Jeff Beck – Arguably the greatest living electric-rock guitarist. And what defined him in my teenaged mind? The opening riff of “I Ain’t Superstitious,” on Truth (with wah wah, to boot! Mrrrrowww!). I could just as easily have picked his Bolero, which I also played in basement bands in high school – but the best “riffs” are sometimes the most succinct. DOGS BEGIN TO BARK ALL OVER MY NEIGHBORHOOD.

3. Smoke On The Water. Ritchie Blackmore, Deep Purple. It is the perfect blend of the Spinal Tap fine line between stupid and clever. The bass and drums provide the engine, but the riff itself is the hulking mass of metal and chrome up top.

4. A handful of Jimmy Page Zep riffs: Whole Lotta Love is the chugging champion of all time. But… what about The Ocean? Heartbreaker? Moby Dick? You can go on and on, but let Whole Lotta Love stand as the elected representative to speak on behalf of so many worthy others.

5. Where did riffage begin? For me, Wipe Out by the Surfaris, Secret Agent Man by Johnny Rivers. I know there were historical precedents, but surf rock started for me with Wipe Out. Plus – best title!

Songfacts: From your solo reissues that just came out, please select some of your favorite tunes and explain the lyrical and/or musical inspiration behind each.

Rik Emmett: Strung Out Troubadours – State of Grace. A self-defining spiritual statement from a humanist: the encapsulation of living one’s way towards a zen moment.

Raw Quartet – Crazy Woman. My version of an old Delta blues acoustic song. I felt I captured a nice lyrical “novelty” thing in this, of a pair of lovers being two of a kind, in their craziness.

Also, Swing Shift – Mr. Bebop and Taste of Steel. This is the “swing” jazz singer/songwriter/guitarist in me. One of my favorite types of song to write, even though I know jazz is a tough sell. So I guess part of the charm for me, is my own contrary arrogance towards the marketplace.

Swing Shift – Santa Fe Horizon and Key Chain. Santa Fe is one of my best “mood” instrumentals, and Key Chain remains one of my most difficult-to-play instrumentals. I didn’t have great chops [yet] as my own producer on this album from 1998, but I had now fully inhabited my composing talent as an artist.

Songfacts: Why do you think Canada spawned so many renowned rock acts with progressive leanings (Rush, Triumph, Saga, FM, etc.) in the ’70s?

Emmett: Probably the influence of FM radio and the fact that prog bands toured Canada with some success (Yes, Gentle Giant, Genesis). Canada was always (and still is) a breeding ground for singer-songwriters, where the song rules. But if you were a guy in a band in the early ’70s, the whole Deep Purple-then-Zep-morphing-into-prog bands had hit hard in basements and garages everywhere. You wanted to play music that took itself very seriously. Float like a butterfly, rock like a piledriver.