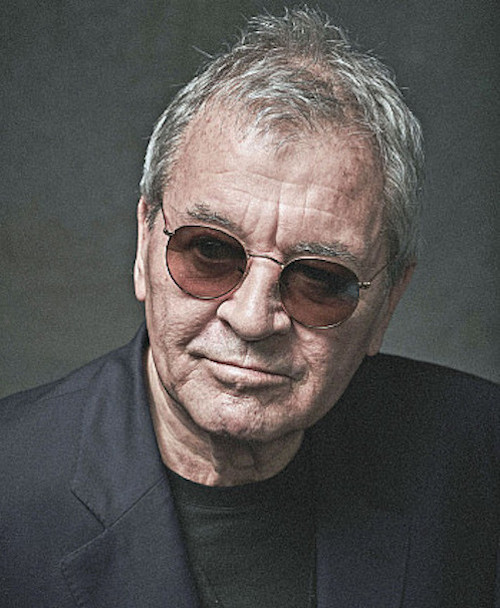 Songfacts: Whoosh! is the third record in a row that Bob Ezrin produced for the band. How large of a role did he play in it?

Songfacts: What’s the story behind the album title and cover image?

Gillan: It came about with the title. We had a couple of submissions by the design department in Germany. The idea of Whoosh! came to me as a very good onomatopoeic word that describes the transient nature of humanity on the planet. And in a more humorous sense, it describes Deep Purple’s career. Like, Whoosh! – it seems like just yesterday it was 1970. It seemed to fit.

And then I think some of the guys looked at the lyrics and saw the apocalyptic nature of some of these scenarios and came up with the dissolving spaceman, which I kind of like. It’s quite powerful.

Songfacts: What song from the Deep Purple Mark II era do you most connect with?

Gillan: I don’t connect with any of them. We still do quite a few on stage and they’re intensely important. At the moment, Pictures Of Home I’m enjoying because of the orchestral melodies and the orchestral dynamics in the song. We don’t think of things like that. We’re thinking about new stuff, and I have no emotional relationship with any of my songs.

Songfacts: What are the “few red lights and a few old beds” you sing about in Smoke On The Water?

Gillan: That’s the hotel we moved into – the Grand Hotel – after the casino burned down during the Frank Zappa concert we were at. And that’s what the song is all about. We ended up at the Grand Hotel, and it was very bright, so we changed the light bulbs. We got some red light bulbs, and we used the bed mattresses as sound baffles.

We set the gear up in the hallways and the corridors of the hotel, and the Rolling Stones’ mobile truck was out back with very long cables coming up through the windows. We tried to re-create an atmosphere in a technical sense the best we could. And when we went to write the lyrics, because we were short on material, we thought it was an “add-on track.” It was just a last-minute panic.

So, the riff and backing track had been recorded on the first day as a kind of soundcheck. There were no lyrics. The engineer told us on the last day, “Man, we’re several minutes short for an album.” So, we dug it out, and Roger [Glover] and I wrote a biographical account of the making of the record: “We all came out to Montreux…” etcetera, etcetera.

That’s how it ended up on the album. It never got played on the radio for a year because it was too long. It was only when a guy from Warner Bros. came to see a show and saw the reaction of the crowd. He ran back to the studio and did an edit of three-and-a-half minutes, and it got played for the first time on the radio. That was a year after the album release. It would never have gotten played if we hadn’t done the edit.

Songfacts: How do you feel about that song today?

Gillan: Like all the narrative songs, you can place yourself there. It’s fantastic – I love singing it. It’s such a groove. And the important thing is everyone in the audience is so involved in the song, and of course, they know every word and the groove.

It’s a shared experience. It’s like a congregational euphoria. It’s amazing. It’s fantastic. I love it. When you asked earlier about what songs do I feel for, in a way, I love them all. I have no trouble getting up for it just about every day.

Songfacts: What is the song Perfect Strangers about?

Gillan: We had been apart for a while, so Perfect Strangers is a contradiction in terms, like an oxymoron. That was pretty much how we described it – there was a lot of suspicion and worry and nervousness about getting together again and having a reunion, and when we all sat around in the basement of this old house in Vermont, there was a log fire and three feet of snow outside.

We had a couple of beers, and nobody started playing. Then, Paicey [Ian Paice] started tapping away and people started grooving, and a little shuffle came along. In five minutes everyone had a smile on their face.

Gillan: I never had a sense of entitlement, so I don’t know. I have no idea how to answer that question because we don’t look at things that way. They’re all like our children, you know? Some are good and some are bad, but we love them all. I can’t answer it honestly. You have to ask people who have an objective opinion about that sort of thing.

Songfacts: Who or what is the “pony trekker” in Space Truckin’?

Gillan: It’s not literal – nothing in that song is literal. It’s all a play on words, like, “We’d move to the Canaveral moonstop” and “pony trekker” and “Borealice.” It’s all nonsense.

Audio samples of all the songs that are set to appear on Whoosh! are below.