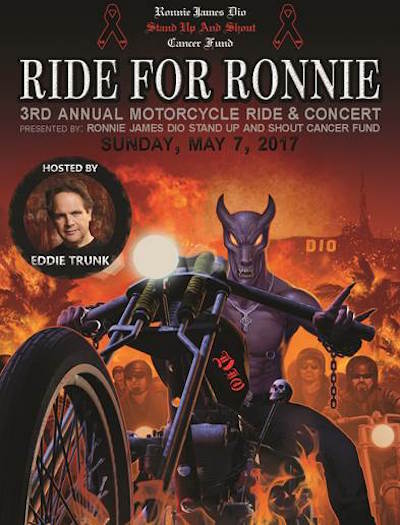 As previously announced, the 3rd Annual Ride For Ronnie Motorcycle Ride and Concert, benefiting the Ronnie James Dio Stand Up and Shout Cancer Fund, will take place on Sunday, May 7th. Riders will assemble for a continental breakfast at Harley-Davidson of Glendale with kickstands up at 11AM. The ride will take them through the streets of Los Angeles County to Los Encinos Park in Encino, where they will be treated to an afternoon of live music, raffle and live auction, food trucks and more. Last year’s Ride For Ronnie event raised over $50,000 for the cancer charity.

The Dio Cancer Fund is pleased to announce that after being unable to host last year’s Ride due to scheduling conflicts, renowned radio personality Eddie Trunk will return to host 2017’s Ride For Ronnie. In an exclusive interview with Billboard, Trunk explains that he was first invited by Wendy Dio to host Ronnie James Dio’s memorial service in 2010, and since then has donated his time to host several subsequent events in support of the Ronnie James Dio Stand Up and Shout Cancer Fund’s quest in cancer research.

Trunk tells Billboard, “It’s a great cause and a great fund. Wendy and her team work real hard on making these things happen… I’m really honored to be a part of this, and I’m really honored to help when I can. It does so many things. It helps people who need help who are struggling with cancer. It helps grow this fund. It helps grow awareness for Ronnie and keeps his memory alive. I’m just happy to be a part of it and help whenever I can when I’m called on.”

Read the rest of the interview at Billboard.

This year’s Ride For Ronnie will include performances by rockers Lynch Mob, Eddie Money, Rough Cutt, Dio Disciples, The Loveless, Sonia Harley and No Small Children.

A silent auction will be conducted at one of the exhibit booths throughout the afternoon, while live auctions, featuring one-of-a-kind rock collectibles, will be held during intervals between artist performances.

Food trucks will be on site throughout the day. Those participating include Slammin’ Sliders, G’s Taco Spot, Greenz on Wheelz and Archie’s Ice Cream. Sponsors lending their continued support to the Ride For Ronnie are Harley-Davidson of Glendale, Law Tigers and Ninkasi Brewing Company. New sponsors to the event this year include Bigg Time Entertainment and LA’s rock radio station, 95.5 KLOS.

Both riders and concert-goers can purchase their tickets by visiting, diocancerfund.org/events.