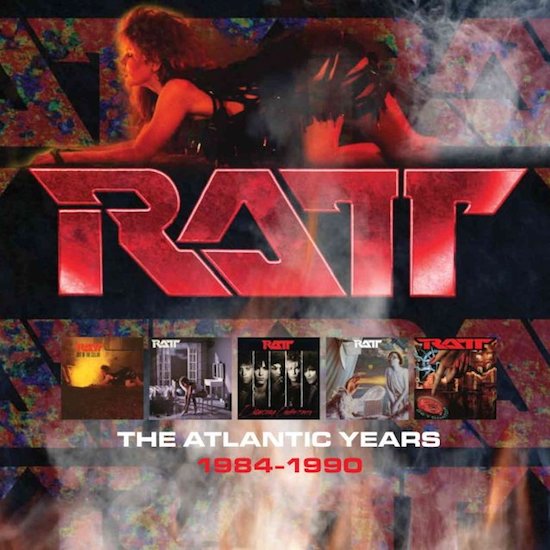 A CD box set containing the five albums Ratt recorded for Atlantic Records will be released on March 27th through Cherry Red Records’ HNE Recordings. The collection, titled Ratt: The Atlantic Years 1984-1990, is housed in a clamshell and includes several single edits as bonus tracks.

Taking inspiration from Aerosmith and Van Halen, Ratt originally formed in Hollywood in the mid-1970s, eventually releasing the independent Dr. Rock single in 1980, before contributing a track to the highly influential Metal Massacre compilation in 1981, and their independently released, self-titled mini-album in 1983. But Ratt finally made their mark when Stephen Pearcy (vocals), Robbin Crosby (guitar), Warren DeMartini (guitar), Juan Croucier (bass) and Bobby Blotzer (drums) signed to Atlantic Records in 1984 for the Out Of The Cellar LP. Their tuneful hard rock found favour with both radio and on MTV, where clips for singles Round And Round and Back For More received heavy rotation. A big influence on the growing glam and hair metal scene based around L.A.’s Sunset Strip, Out of The Cellar would soon reach triple platinum status. The radio edit of Round And Round is included as a bonus track.

In 1985, Ratt followed up their full-length debut with Invasion Of Your Privacy. Produced by Beau Hill, and featuring the singles Lay It Down and You’re In Love Ratt’s popularity wasn’t confined to the States, as they would make fans as far afield as Japan, as well as inclusion on the U.K.’s legendary Monsters Of Rock festival in 1985, on a bill featuring ZZ Top, Marillion, Bon Jovi and Metallica Invasion Of Your Privacy would eventually make double platinum sales, and includes What You Give Is What You Get (single edit) as a bonus track.

Not wasting any time, and again with Beau Hill at the helm, Ratt released Dancing Undercover in 1986. Lead single Dance would make a healthy dent on the charts, as well as featuring in an episode of Miami Vice, while Body Talk would be included on the soundtrack to Eddie Murphy’s The Golden Child. A single edit of Dance has been added to the album.

Fourth album Reach For The Sky (1988) was the last album to be produced by Beau Hill, and was co-produced with Mike Stone. Featuring the single Way Cool Jr., Reach ForThe Sky racked up platinum sales, proving that Ratt could still reach the U.S. top 20. The MTV Unplugged version of Way Cool Jr. is included as a bonus track.

Ratt’s fifth record, 1990’s Detonator, was the last album released by Atlantic and the final record to feature the classic lineup. Enlisting Jon Bon Jovi for backing vocals on Heads I Win, Tails You Lose, the abum is also notable for a number of co-writes with Desmond Child,, as well as production from Sir Arthur Payson. The tracks Lovin’ You’s A Dirty Job and power ballad Givin’ Yourself Away made healthy showings on the U.S. Mainstream Rock Chart. The Ratt Fonic Monster Mix and Ratt Fonic Radio Mixes of Lovin’ You’s A Dirty Job plus Nobody Rides For Free from the Point Break soundtrack are included as bonus tracks.