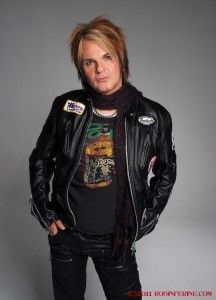 Poison drummer Rikki Rockett guest on Eddie’s Sirius/XM show, Eddie Trunk Live, on December 14th. The drummer discussed being diagnosed with oral cancer this past summer. Excerpts from the interview appear below as transcribed by Blabbermouth.net.

On how he was diagnosed:

“[In] June, I kind of got sick. I had this horrible cold, sore-throat thing, and they were scoping me and they were doing biopsies, and nothing was coming up. And finally a doctor at USC did a biopsy and took a look and he said, ‘I believe you have oral cancer.’ And what it was is a tumor at the base of my tongue… This is very similar to Bruce Dickinson [Iron Maiden], very similar to [actor] Michael Douglas, similar to Tom Hamilton [Aeromsith], as far as I know; I don’t know the details of his. And two adjacent lymph nodes that it kind of… Normally, it does spread to the lymph nodes; that’s typical. That’s how you find out you have it ninety percent of the time.”

He continued, “I went down to USC, to all the doctors down there, and the first doctor I went to sat me down, looked me in the eyes, and he said, ‘You’ve had pretty good health all your life.’ He goes, ‘You picked one of hell of a cancer to get.’ He said, ‘It is very treatable, it’s very curable, but it is a son of a bitch to treat, and I’m gonna hurt you.’ And it scared the hell out of me. And I’m, like,’ What are you talking about?’ he goes, ‘About fifty percent of my patients wind up hospitalized through the treatments, ’cause you’ve gotta do chemo and radiation at the same time, or you’ve gotta do surgery. And sometimes when you do surgery, you still have to do chemo and radiation. So we’re gonna try chemo and radiation.’ So I wound up doing the chemo. I did nine rounds of chemo of cetuximab…and it’s a targeted immunotherapy, so it’s not like the typical chemical that just kills everything. But they said one problem it does have is you get a rash. And I’m, like, ‘A rash?’ They’re, like, ‘Yeah, you’re gonna look like a kid with really bad acne.’ So I started to get it on my face and on my chest and on my back and shoulders and a little bit on my trunk, and then, bam, in two weeks, it just calmed down for some reason. So I was very lucky with that. But then I started radiation, and I did thirty-five rounds of radiation; it was five days a week for seven weeks, and that kicks your dick into the dirt. But I went, ‘Okay, this is what I’m gonna do. I wanna beat it, so I’m just gonna go head first into this. I’m gonna set myself up where every single day, I do something positive for my health. I’m gonna work out one day, I’m gonna go to therapy one day.’ I go to this occupational therapy where they do swallowing and speech and stuff like that, to keep your neck going. Regular therapy, acupuncture…”

“Where I’m at now is I went last week for my follow-up. Both doctors said I’m doing excellent, and they both have excellent prognosis. In early February, I get my PET scan, and that’s the end-all; that tells you if there’s any activity. They both said they suspect that there won’t be. And so I’ve got fingers crossed. But I’m just gonna try to put that out of my mind for now and just continue to get better and feel better. There’s nothing that looks like it’s there anymore. They’ve gone down, they’ve looked at my throat… But it’s swelled up and it’s hard to tell, but it looks like it’s in remission.”

Speaking about why he believes he got oral cancer:

“[HVP-human papilloma virus],it is the number one leading cause of oral cancer these days. There’s less and less of the truck drivers that chew tobacco for thirty years getting it, because people are more aware that that kind of stuff isn’t good. So we are getting marathon runners and all these elite athletes with this. I have a friend that’s a therapist, and five years ago, it was five percent of the people she treated, and now it’s close to ninety percent…It can be spread sexually, but now they’re saying that it can spread [through] deep-kissing and actually hand to mouth. I mean, if you see the Olympic swimmers, they swim and they smack their hand on the side of the pool for each lap, and their hands are full of warts and stuff from HPV. Now the wart kind of HPV is not the same as the strain that causes cancer, but it is spread almost identically. For men, you can’t tell if you have it. For women, you can get a papsmear. But the doctor estimated probably it was fifteen [or] twenty years ago [when I contracted it], and my body probably got rid of it, but it mutated itself and my body would probably see that again and get rid of it. But there’s no way to tell who got it. I mean, I know a couple that’s been married for fifteen years and they’ve never cheated on each other, and they’re pointing their finger at each other [after one of them was diagnosed with oral cancer], and it turned into a thing until the doctor sat ’em down and went, ‘Look, you can get this so many ways.'”

‹ VIDEOS FROM MOTORHEAD, THE WINERY DOGS, AND A LYRIC VIDEO FROM THE CULT, ALL POSTED ONLINE

GUITARIST RITCHIE BLACKMORE SAYS IF HIS ROCK PERFORMANCES GO WELL, HE WOULD BE OPEN TO ADDING MORE DATES ›