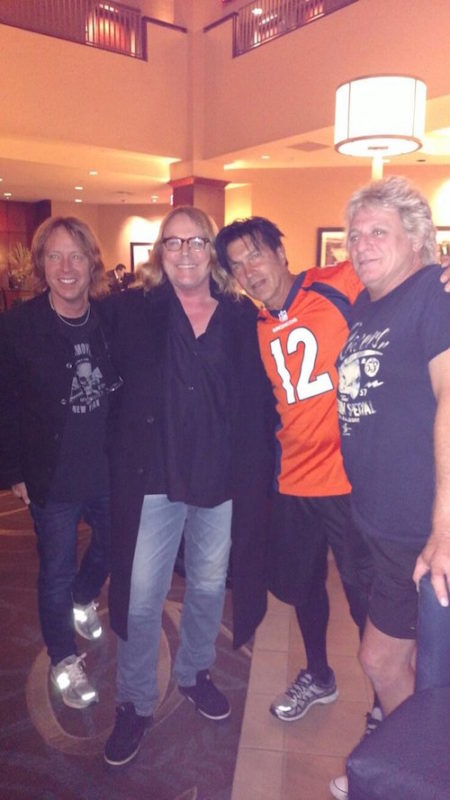 A picture of the classic Dokken lineup has surfaced online. As previously reported, the band will reunite for six shows in Japan in October, and one in the States, which will be in Sioux Falls, South Dakota, on September 30th.

In a recent interview with Classic Rock, guitarist George Lynch says the reunion is, “…like getting back together with an ex-spouse.”

When asked how he feels about it, he replied, “Well, um, it’s a mixed bag. It’s complicated. But the overarching feeling I have is I’m glad it’s happening for the right reasons. One of which is money. But another of which is putting a nice bow and closure on an important part of our professional and artistic lives, and also for people who care about this kind of music. Because it was important to their lives. And with all the bad things going around it’s nice to see that people can come together sometimes. I just think it makes people feel good. I know it’s a drop in the bucket, but, you know, I’ll take it.”

Discussing the new song the band wrote specifically for this reunion tour, Lynch stated, “Well, the people I’ve played it for all love it and think it’s what they imagine or hope that a new Dokken song would be. And that’s that it’s still true to the old style and sound while also being a little more contemporary…And it’ll be included on the live album.” He adds these shows will be recorded for a live album and “a DVD as well.”

When asked about his current relationship with frontman Don Dokken, he admitted, “…we pretty much don’t have a relationship at this point. The only time we see each other is when we’re on the road and maybe Lynch Mob is playing the same bill with Dokken…So there is no relationship.”

On whether or not he thinks there would ever be any more Dokken shows, with the classic lineup, in the future, he said, “If I were betting I’d say there’s probably a 50/50 chance. And I’d be advocating for that, too…But it definitely would be something that promoters and the fans would like to see. On a business level I’m sure it could be done very easily. So, you know, never say never.”

Read all of Classic Rock’s interview with George Lynch, by clicking here.