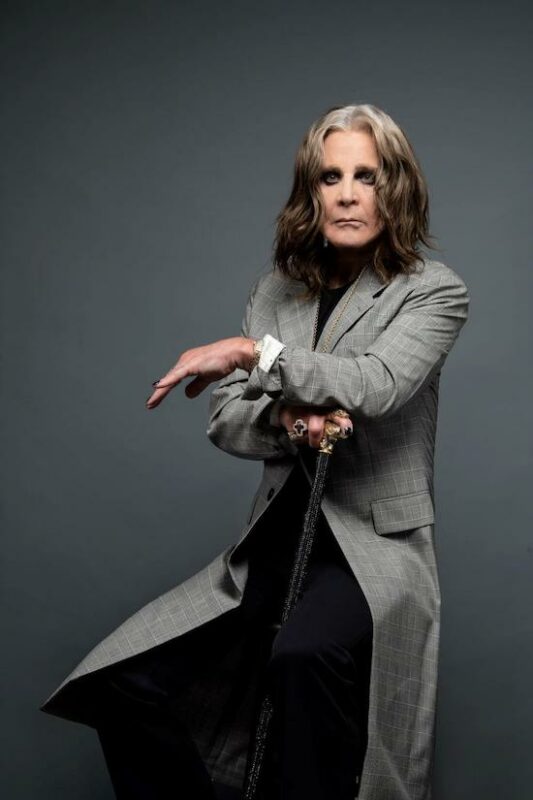 Rolling Stone‘s Kory Grow has posted an article titled, Ozzy Osbourne Once Picketed His Own Gig and 12 Other Things We Learned Hanging out With the Iron Man, highlights from story appear below.

1. Ozzy has strong opinions about what makes music “heavy.”

…When producer [of Osbourne’s latest album Patient Number 9] Andrew Watt started working with [him], the singer shared with him the secret of what makes a song “heavy.” “He said to me, ‘When you listen to [Black] Sabbath or [Led] Zeppelin, what’s the loudest thing in the mix?” Watt recalls. When the producer said the drums, Osbourne said no. “Bass is the loudest thing. That’s what makes it so heavy. And if you listen to [Led Zeppelin’s] Whole Lotta Love, Heartbreaker, or Dazed and Confused, the bass is allowed to sing, and that’s what makes it so heavy.”

“Ozzy loves bass,” Metallica’s Robert Trujillo, who played with Osbourne in the Nineties and Aughts, says. “He used to tell me, ‘Rob, I’m your best friend!’”

…4. Randy Rhoads, the first guitarist Osbourne worked with after Sabbath, wasn’t a big Eddie Van Halen fan.
Before joining Osbourne’s band, Rhoads had played guitar in the glam-rock group Quiet Riot, which had been gigging on the Sunset Strip at the same time as Van Halen. Both Rhoads (who was recently recognized by the Rock and Roll Hall of Fame) and Van Halen were guitarists to watch in the mid-1970s, playing with a similar flare and incorporating finger-tapping into their fleet-fingered solos. Still, Eddie Van Halen became a guitar hero before Rhoads, thanks to Van Halen’s immediate success. “I heard recently that Eddie [Van Halen] said he taught Randy all his licks … he never,” Osbourne says. “To be honest, Randy didn’t have a nice thing to say about Eddie. Maybe they had a falling out or whatever, but they were rivals.” [Dana’s note: see related story, In A New Clip From The Forthcoming “Randy Rhoads Documentary, ‘Randy Rhoads: Reflections Of A Guitar Icon,’ The Rivalry Between Rhoads And Eddie Van Halen Is Discussed“]

5. Ozzy understands his influence as one of heavy metal’s innovators — he just doesn’t always fully get it.

“Bands on the Ozzfest would say, ‘Man, Sabbath influenced me,’” Osbourne says, looking perplexed. “I’d listen to some of them, and I’d go, ‘I guess I can hear a bit of Sabbath there.’ But other bands, I’d be like, ‘What the f–k is going on?’” He growls in his best death-metal vomit voice: “Death, die, arrrgh.” “Man, what the f–k is that all about?” he asks. “But then again, we gave somebody a stage.”

…8. Ozzy has surprisingly diverse taste in music — and one obsession.

Osbourne’s favorite artists to listen to these days are Peter Gabriel, Stevie Wonder, and Paul McCartney, though one of his best friends, Billy Idol guitarist Billy Morrison, tells Rolling Stone that they also like listening to the Sex Pistols, Gary Numan (Osbourne’s favorite Numan LP is The Pleasure Principle but Morrison turned him onto Splinter), and occasionally Madonna. But Osbourne’s favorite artist to this day is still the Beatles, a group he says he listens to every day. (Darkside Blues, the final track on Patient Number 9, is a conceptual Beatles homage that Osbourne likens to the runout groove on Sgt. Pepper’s Lonely Hearts Club Band.)

All you have to do is mention the Fab Four, and he has stories ready about trying to convince Paul McCartney to play bass on his own Beatles-esque song Dreamer in 2001. He even slams his fist on the coffee table with joy just thinking about how the former Beatle was recording in the same studio as him. (Macca said Trujillo’s bass track was too good to replace.)

“I put [With the Beatles] on the other day,” Osbourne recalls, referring to the first Beatles LP he ever owned. “It took me back. I was like a kid at school in f–king Beatle boots, Beatle suit, Beatle wigs. The f–king wigs were great.”

Read more at at Rolling Stone.