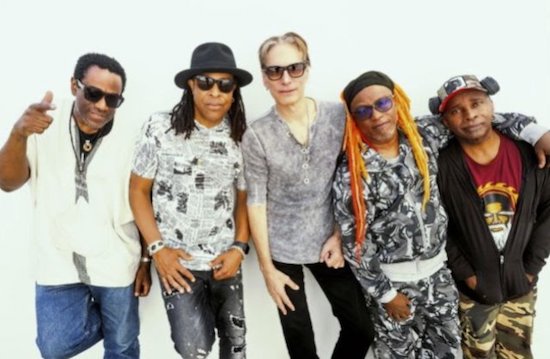 On the heels of Living Colour’s incredible performance at Rock In Rio with Steve Vai, the band decided to recreate that energy with a re-recorded version of their classic Cult Of Personality.

Cult Of Personality featuring Vai is out now and is available everywhere you buy and stream music. The song was their finale of Living Colour’s Rock In Rio set, where over 100,000 were in attendance and the entire crowd fixated on the bands performance and sang every word to the bands most iconic song.

Living Colour guitarist and co-founder Vernon Reid states, “In celebration of 30th anniversary of Living Colour’s first appearance in Brazil, which also was Doug Wimbish‘s first live appearance with the band, we are releasing a special edition version of Cult Of Personality featuring our special guest in Rio De Janeiro, our dear friend, the extraordinary Mr. Steve Vai on additional guitar. Engineered and mixed by the original producer of the song Mr. Ed Stasium.”

Vai has dedicated his talents to creatively advance the language of music. While many artists fit easily into a single category, Steve remains unclassifiable. He is a musical alchemist of the highest order, leaving fans in awe with his exceptional guitar skills and musicianship. At age 12, he started taking guitar lessons from Joe Satriani. At 18, he began his professional music career transcribing for, and then playing with, the legendary Frank Zappa. For Vai, virtuosity and versatility are not mutually exclusive. He has created music for blockbuster films, bestselling video games, national sports franchises, and corporate brand initiatives.

Vai’s work has been recognized with a long list of awards and honors, including over 15 from Guitar Player magazine alone. His career accomplishments have earned him honorary doctorates from Berklee College Of Music and Musicians Institute. The 2016 Long Island Music Hall Of Fame inductee was voted the 10th “Greatest Guitarist” by Guitar World magazine and consistently lands among the best in various lists of the top guitarists of all time.