Motörhead’s Motörboat regrets to announce that thrash metal trailblazers Megadeth have been forced to withdraw from the September 22nd-26th cruise due to medical reasons. Heavy metal all-star band Metal Allegiance – including Megadeth’s David Ellefson and Chris Broderick – has been added to the Motörhead’s Motörboat music lineup.

Megadeth issued the following statement about their unfortunate cancellation, “Due to complications arising from a previous cervical spine surgery, and upon his doctor’s strict recommendations, Dave Mustaine has canceled all performances for the next 8 weeks. With rest and treatment, he is expected to recover and resume performing soon. The band was looking forward to the concerts and cruise, and is disappointed that they will not be able to see their fans. Megadeth expects to return to the road and will see their fans soon!”

“You can’t replace a band like Megadeth, who have done so much to change the landscape of heavy music over the past 30 years. We wish Dave Mustaine all the best in his recovery,” says event producer Alan Koenig of ASK4 Entertainment. “But we’re excited that Megadeth’s David Ellefson and Chris Broderick will still be joining us. The whole reason to do these music cruises is to give fans an experience that they can’t get anywhere else – and bringing Metal Allegiance onboard with metal’s most loyal fans fits that bill.”

Megadeth’s David Ellefson comments, “I’m really looking forward to being together with our friends and fans on Motörboat. Metal Allegiance is a great way to continue our brotherhood of all things metal.”

“I always love getting together with my brothers and throwing down. The Allegiance jam is sure to be the best jam I’ve been involved with yet,” says Philip Anselmo.

Rex Brown of Kill Devil Hill says, “We have jammed at some big metal events in the past, but Metal Allegiance is gonna blow EVERYONE on the Motörboat cruise right out of the water!!! Let her rip!”

Mike Portnoy agrees, “I’ve been honored to have been part of some previous metal jams over the years and there’s something very special and (Goddamn) electric that happens when you put this group of guys together in a room or on a stage. Myself and my brothers in metal on the Motörboat are metal lovers through and through and we love to get together to jam, have fun and pay tribute to the music that we all love so much.”

The first annual Motörhead’s Motörboat will sail from Miami, visiting the ports of Key West , Florida and Cozumel just off Mexico’s Yucatan Peninsula for the September 22nd-26th cruise on the Carnival Ecstasy. “The Loudest Boat In The World” will feature Motörhead, Anthrax, Metal Allegiance, Testament, Down, High On Fire, Kill Devil Hill, Zakk Wylde, Jim Breuer Band, Danko Jones, Fireball Ministry, Wilson and Cilver, as well as a spoken word performance by legendary heavy metal musician, author, and television personality Scott Ian. While onboard, guests will have a once-in-a-lifetime opportunity to interact with band members and will see unforgettable performances on various stages throughout the ship.

A limited number of cabins are still available for Motörhead’s Motörboat at www.MotorheadCruise.com. 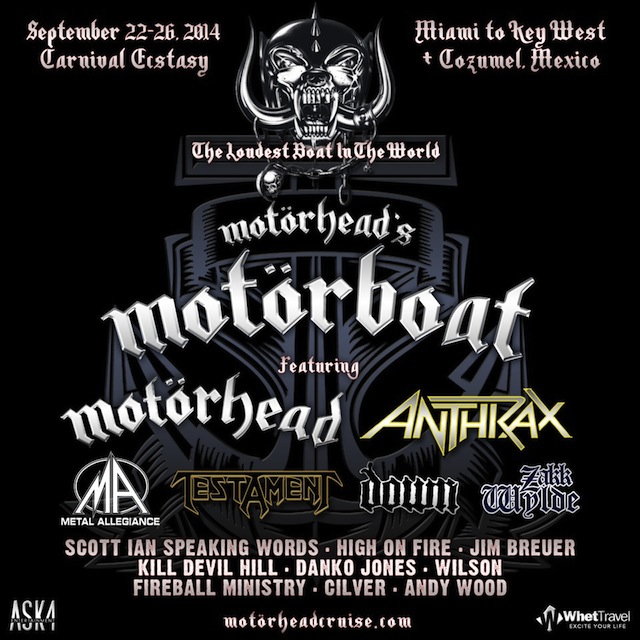