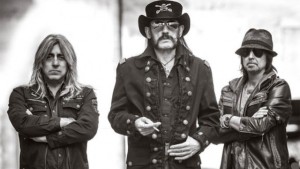 Grammy Award winning iconic rock band Motörhead, will be honored by the Los Angeles City Council on August 26th in celebration of their 40 year anniversary and the upcoming release of their new album Bad Magic. Councilmember José Huizar will be conducting the honor which will take place at 10:00am at the council chambers at city hall.

Bad Magic is the band’s 22nd studio album and is slated to be released August 28th via UDR Music/Motörhead Music. The album was recorded at NRG Studios in Los Angeles, CA with long-time producer Cameron Webb. Bad Magic is the follow up to the band’s highly successful album Aftershock which saw Motörhead enjoy their most successful year yet, including a fourth Grammy nomination.