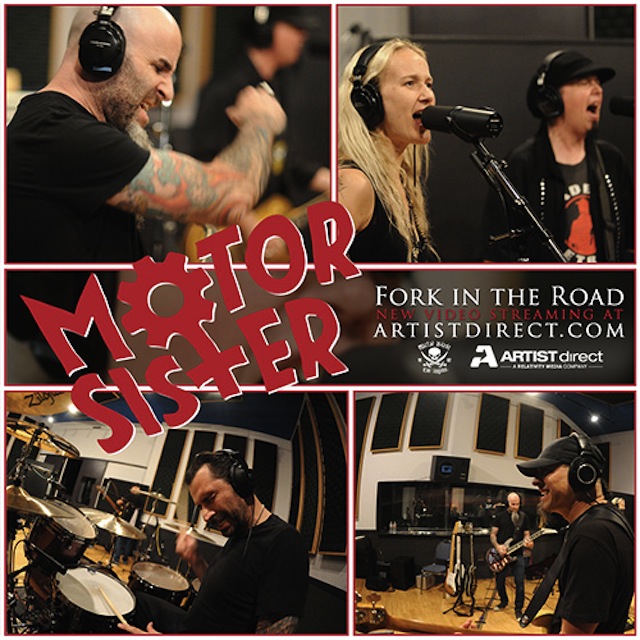 Motor Sister is a group of musicians whose collective musical pedigrees speak for themselves. Mother Superior founder, guitarist, and vocalist Jim Wilson fronts the band, with Anthrax’s Scott Ian on guitar, Pearl Aday on backing vocals, Joey Vera on bass, and John Tempesta on drums.

Today the band presents the first video from Ride. The video shows the band recording the song Fork in the Road. Check out the exclusive premiere, courtesy of Artist Direct, which can be viewed below. Fork in the Road features a rare glimpse into the recording of this Mother Superior favorite by Motor Sister.

The group was originally assembled to jam for Scott Ian’s fiftieth birthday party. Thanks to Scott’s wife Pearl Aday, who has been working on her solo career with Mother Superior front man Jim Wilson for years, all it took was a quick phone call and the stage was literally set for Scott’s dream gig. “I wanted to cherry-pick a set list of my favorite Mother Superior songs and get these guys together and have the concert at my house,” Ian says of the event that eventually led to an album.

“[Mother Superior] front man Jim [Wilson] was totally into the idea. Pearl was a huge Mother Superior fan from way back and was in. I asked my good friends Joey Vera (Fates Warning/Armored Saint) and John Tempesta (White Zombie, The Cult) to be a part of it because I knew they were both big fans as well and with no hesitation they said, ‘We’re in.'”

Wilson, too, was stoked by the opportunity to dust off some songs he hadn’t played since his LA rock trio broke up in the early 2000’s after releasing eight albums and playing as Henry Rollins’ backing band. “I definitely didn’t need any arm-twisting,” he says. “I was totally flattered and thought it was a great idea. I figured it would be fun and it was a great opportunity for a new chapter to be established in order to move forward.”

The recordings from those two days are what became to be known as Motor Sister’s Ride. Today, the first single from those sessions, This Song Reminds Me of You, is available for to stream at metalblade.com/motorsister/, and a featurette video on the formation of the band and the process behind the record can be viewed here.

Ride will be released March 10th in North America on Metal Blade Records. Pre-orders for the album are available now at the following location.

In support of the project Motor Sister have scheduled a special show on February 12th in Brooklyn, NY at Saint Vitus. Tickets for the show can be purchased here.

EDDIE TRUNK GUESTS ON A COUPLE OF PODCASTS, FIND OUT HOW TO LISTEN, HERE ›