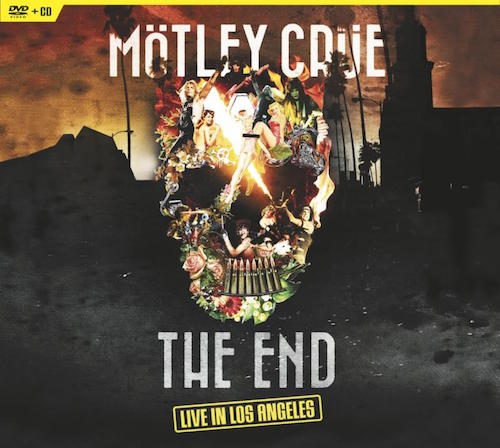 On December 31st, 2015, before a sold-out Staples Center arena in Los Angeles, Mötley Crüe bid their final farewell. Their 35-year career as a band ended with a spectacular New Year’s Eve performance in their hometown, just a few miles from where it all started on the Sunset Strip.

In January 2014, Mötley Crüe signed a binding legal document known as “cessation of touring” agreement, preventing them from touring under the band’s name past the year 2015 — the first of its kind. This was followed by their two-year Final Tour, performing across five continents (North America, South America, Europe, Australia and Asia), with 164 shows in 72 markets and grossing over $100 million.

Produced and distributed by Eagle Rock Entertainment, Mötley Crüe: The End fully captures the energy and emotion of the evening. Known for their over-the-top production, Mötley Crüe did not disappoint for their last show ever on New Year’s Eve: from massive, cutting-edge pyro, including Nikki Sixx’s bass guitar spitting fire over 30 ft. into the air, and Tommy Lee’s “Crüecifly” drum roller coaster, amongst many other spectacular elements. Lead singer, Vince Neil, delivered an emotional, “thank you” speech to the audience, while the band supplied next-level, high-octane fueled energy, ringing in the New Year on stage with thousands of balloons raining down on the crowd. The grand finale of the show included a blow-out performance of their hit single, Kickstart My Heart with Nikki Sixx and Vince Neil floating above the audience in far-reaching “cherry-pickers.” Leaving fans in tears, the show concluded with an emotional encore rendition of Home Sweet Home from the second stage riser in the center of the audience. The CD includes audio tracks of the live performances from this show.

Mötley Crüe: The End – Live In Los Angeles represents a fitting end to a legendary career and the culmination of the rock icons’ 35-year career, in one special, explosive night.

AVENGED SEVENFOLD’S “THE STAGE” REPORTED TO BE RELEASED TOMORROW ›