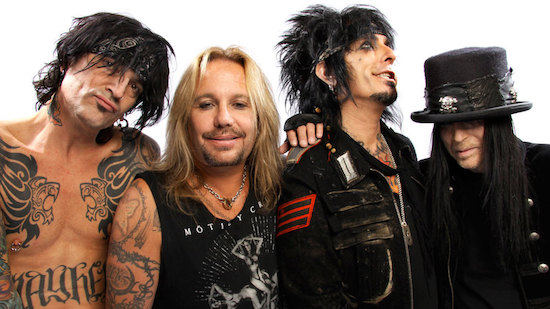 [Dana’s note: Yes, I know this is a very gossipy “news story,” so please keep that in mind when reading, all acts are hearsay and alleged. WARNING: Graphic language and descriptions.]

But real life with Motley Crue was “even more debauched” than the Netflix movie, according to their former limo driver Al Bowman.

In an exclusive interview with Sun Online, Al Bowman, now 60, revealed how he would be tasked with finding the 80s rockers “virgin groupies,” driving them back and forth to drug dealers – and even dropping them at strange Satanic ceremonies.He recalls doing countless “condom clean ups” in the back of his limo – and how drummer Tommy Lee would almost tip his car over with rampant sex sessions.

“I enjoyed the movie but there was much more debauchery in real life,” Al, who now lives in Henderson, Nevada, said.

“I mean some of the sexual stuff they used to get up to was kind of disgusting but I guess there’s only so much you can fit into 90 minutes.

“I drove them for about five years, I became like a fifth member of the band.

I would take them to buy drugs, to pick up girls, to rescue them when they had partied too hard – they’d call me at all hours.

They called me ‘Al the rock-n-roll limo man.'”

Al…says all the band members would have sex with girls in the back of his limo – but he particularly remembers drummer Tommy Lee’s in-car romps.

He says the star was so well endowed that when he had sex with women in the back of his limo, the car “would almost tip over” when they stopped at red lights – while the girls would be “squealing with pleasure.”

“Tommy Lee has the biggest weiner I’ve ever seen on a man and he used to make the girls squeal in the limo,” he said.

“Because he was so big he just seemed to rock the limo more than anyone else – it was like it was going to tip over.

You couldn’t tell when we were moving but when we stopped at a red light the limo would actually be moving back and forth and I would be thinking, ‘Please turn green – everyone is looking’. They’d all get high on coke and booze and screw – Tommy loved to f**k girls in the limo.

Sometimes he’d get himself into trouble – I remember one time when he was in a relationship with a girl called Candace but he’d been with this other girl who had a boyfriend – and all of a sudden the boyfriend came back and started chasing him with a knife. He had to jump in the limo to escape.One time I took some photos of him and some girls in the limo and gave them to him – but his girlfriend found them and hit him over the head with a pan.

He called me up and said, ‘Why did you give me those pictures – she’s ready to kill me you a**hole!’

Another time he called me from a phone booth in North Hollywood and asked me for some cocaine to perk him up – then the line went dead – so I rushed to where he said he was and found him blacked out in the phone booth with his sports car still running.

“I had to drag him into the limo and take him home – I saved his a** a couple of times.”

And Al claims while the band had no shortage of groupies – they were particularly fond of virgins – and would ask him to go find them so they could “pop their cherries.”

“They were always on the hunt for virgins,” he said.

“That was my job when I drove on the Shout at the Devil tour when they were playing with Black Sabbath [Dana’s note, it was actually Ozzy Osbourne they opened for, not Black Sabbath] – they would always say, ‘Al go see if there’s any groupies out there who are are virgins and bring them to us. We want them’. They just wanted to pop their cherries.

I remember one night in Bakersfield during that tour I got two virgins for Nikki and Vince and then they got me my own hotel room as a thank you.

That was a fun night.”

While Al remembers having a lot of fun with the band – he also remembers they used to have a dark side.

He recalls taking various members to creepy ceremonies and rituals around Los Angeles.

Al says bassist Nikki Sixx was particularly interested in the “dark arts” and he once gave him and famous occultist Anton LaVey, who founded the Church of Satan, a lift to a strange ceremony at a house behind the famous Whisky A Go Go nightclub in Hollywood.

“I remember them having an interest in Satanic rituals and I used to take them to these weird parties at an old mansion in Hollywood where there’d be people doing all kinds of creepy stuff,”

Nikki was very much into the black arts, Alistair Crowley, incantations, witchcraft, all of that stuff. I drove him once with Anton LaVey and they were doing these weird chants.

I had an intercom system so if they put up the divider in the limo I would just turned on the intercom and listen to everything that was going on.

So I heard everything they were talking about. Then I dropped them at this strange house covered in ivy behind the Whisky A Go Go.

There was some weird ceremony there and it was full of up and coming actresses and they were all into this stuff.

They were in circles and there were candles and blood and horse hair – all kinds of weird stuff.

At the time I just thought ‘Ah it’s Hollywood – it’s all a big horror show anyway’. I said, ‘You guys making a horror movie about witchcraft or something?’ But it seemed like serious business for them.

Nikki would call on spiritual forces. I remember asking him, ‘What’s the deal with all this stuff? Are you trying to call on angels from heaven to guide the band?’

He said, ‘No I’m trying to conjure up demons from hell to guide the band.’ So I was like, ‘Ah so you’re calling them up not down?’ It was kind of funny.”

The band’s hard partying and excess finally caught up with them in 1984 when singer Vince Neil lost control of his sports car after a night of boozing – killing his passenger – Brit Hanoi Rocks star Nicholas ‘Razzle’ Dingley – and injuring two others.

Al, says he and Motley Crue guitarist Mick Mars saw Vince and Razzle just before the crash at the liquor store in Redondo Beach, California, where they had driven after hours of partying.

Mick had just got his divorce through and was celebrating with four women in the limo,” Al said.

“We stopped at the liquor store – we all lived in the same area of Redondo Beach and Hermosa Beach in those days.

We saw Vince and Razzle and they were both drunk – so we told them to get in the limo.

But Vince insisted in getting in his own car. He drove a Pantera at the time, which was not the most practical car for getting around town – it was loud and huge.

He was always a bit of a show off.”

Vince was sentenced to 21 days in jail for manslaughter – and he did 15 days of the sentence in July 1986.

But Al said as soon as he was released – the rock star couldn’t wait to get partying again.

“The day he got out of jail – or at least very soon after – I was his driver to a concert at Santa Monica Civic – the bands Dokken and Ratt were playing as I recall,” Al said.

“Everybody went and everybody was welcoming Vince back like nothing had happened.

He just wanted to party. As soon as he got out of jail he started drinking again, trying to score coke, getting b**w jobs in the limo.

It was the first thing he wanted to do. Nothing had changed – it was the same old Vince.”

A representative for Motley Crue declined to comment on any of Al’s claims but said, “All I can say is that it seems rather remarkable that four band members had one limo driver who was at all those places, when the band had multiple limos and drivers in that era.”

Al hit back saying it was “well known” he was a regular driver for the band – and that his photos prove it.

‹ MOTLEY CRUE ENJOYS A BOOST IN MUSIC AND BOOK SALES