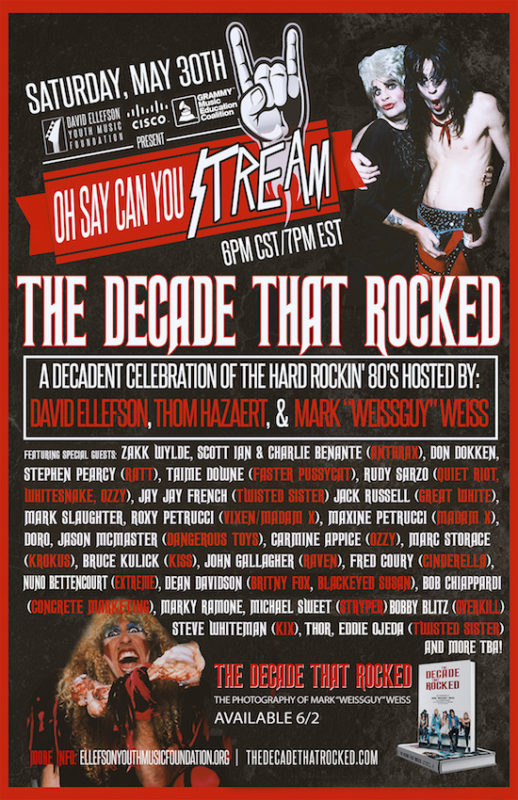 Saturday May 30th, 7:00pm EST -11:00pm EST the David Ellefson Youth Music Foundation, the nonprofit charity started by GRAMMY-winning Megadeth co-founder and bassist David Ellefson, in partnership with the GRAMMY Music Education Coalition, is proud to present The Decade That Rocked, the third offering in their Oh Say Can You Stream livestream series. Once again, hosted by Ellefson and his partner, co-author, and solo band vocalist, Thom Hazaert, with legendary music photographer Mark “Weissguy” Weiss, The Decade That Rocked will be a loving nod to all things Metal and Hard Rock, a decadent celebration of Weiss’ upcoming book, The Decade That Rocked: The Photography Of Mark “Weissguy” Weiss, available June 2nd from Insight Editions.  Listen to the live stream here.

As one of the driving artistic forces of the 80’s, and one of its most notable “go-to” music photographers, Weiss’ resume reads like a who’s who of platinum 80’s Hard Rock, celebrated for his photographic work and creative direction on iconic covers and imaging elements for artists including Bon Jovi, Dokken, Twisted Sister, Anthrax, Suicidal Tendencies, Skid Row, Raven, W.A.S.P., and more. Mark’s work has endured through subsequent decades as well, with work for Gwen Stefani, Christina Aguilera, Kelly Osbourne, and more, plus recent exhibitions at the Hard Rock in Vegas and the GRAMMY Museum.

With the first two events, Oh Say Can You Stream and The Make-Up Test, attracting over half a million viewers, across social media and streaming platforms, and TV and Radio simulcast, and a laundry list of some of the most notable rockers of the 80s (and today), The Decade That Rocked is sure to live up to its name. The David Ellefson Youth Music Foundation (DEYMF) has also set up an eBay auction in connection with the event, with auctions running all week including signed Mark Weiss prints, a collection of Ellefson’s stage-used clothing and gear, and other donated items. You can find the listings at: ebay.com/usr/ell.

Says co-host Hazaert, “The first two Oh Say Can You Stream events were a phenomenal success, really beyond our wildest imaginations, and we were so thrilled with the outpouring of support and excitement that came with it. Since then, David and I have livestreamed several times a week, just, if anything, to try and keep people entertained, and aside from raising awareness, and funds, for the Ellefson Youth Music Foundation, and all of our work there, that’s really what these events are about. And I think, as far as entertainment goes, we are definitely going to outdo ourselves this time around.

Of course our mission of spreading music and music education is on the agenda, as well as having options for people who want to donate and support the foundation, with some amazing prints and items generously donated by Mark, and some of our other friends, and a ton of David’s stage-worn clothing, and gear, that we will auction off to benefit the DEYMF. Not only is it another chance to spread the word of the foundation, but a celebration of our friend Mark, and his incredible book. There is something so over-the-top iconic about the 80’s, and all the amazing Rock and Metal music that came from it. Personally, I think you’d be hard pressed to find a decade that rocked harder. And we’re truly honored to have many of the guys who made it rock so hard joining us on Saturday.”

Ellefson adds, “We’re so appreciative for all the support from our friends on the first two Oh Say Can You Stream events, Alice Cooper, Dee Snider, our partners at Cisco, Jackson Guitars, Hartke, Samson, Shure, Peterson Tuners, of course the GRAMMY Music Education Coalition and so many more of our amazing friends who joined, and supported us. It’s always a great time when you can get that many friends together, all with a common goal and purpose. Not only has it given us an incredible platform to support and inspire kids around the World through music, but to bring people together in a time when I think we all so desperately need it.

And we will continue that with The Decade That Rocked, not only paying homage to Mark, his incomparable career, and the incredible book that it has now inspired, but to the decade that spawned not only Megadeth, but, really, all of our contemporaries. And it’s really an amazing event to be able to get so many of us together to talk about it.

The David Ellefson Youth Music Foundation is an affiliate of the GRAMMY Music Education Coalition, a collaborative movement whose goal is ensuring all students in public schools across America have music education. Lee Whitmore, the Coalition’s executive director, shared, “Our Coalition of supporters of public music education numbers more than 70 organizations, and the David Ellefson Youth Music Foundation joined us early on. David’s enduring support for what music does in students’ lives is unwavering. Oh Say Can You Stream has an amazing lineup. It will be awe-inspiring, supporting kids, music education, and helping provide COVID-19 relief in our communities.”