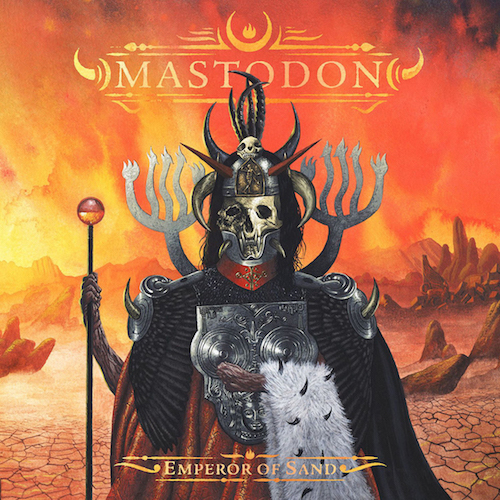 Emperor of Sand, the eighth studio album from internationally celebrated heavy rock icons Mastodon, has entered Billboard’s Top Album Sales Chart at the #1 position, making this not only the best-selling album of the week over all other entries, but also the band’s biggest sales debut in their history. In addition, Emperor of Sand topped the Billboard Alternative Albums, Rock Albums, Hard Music Albums and Physical Albums charts, plus the #1 vinyl selling album of the week completing Mastodon’s biggest debut of their career. Emperor of Sand debuts at the #7 position on the Billboard Top 200 Albums Chart and marks the band’s third consecutive album to enter into the Top Ten, including Once More ‘Round the Sun (2014) and The Hunter (2011).

Mastodon’s new single Show Yourself is currently #8 at rock radio. The band recently performed the hit single on Jimmy Kimmel Live! – Watch the performance, below. They will also perform the song on TBS’ Conan on a later date to be announced soon.

Thrilled with this achievement, the band has offered this statement:

“We want to thank all of our fans for running out and picking up a copy of our new album Emperor Of Sand. The support you guys have shown us has been unbelievable. The album is an important and emotional one for us and it makes us very happy that it is connecting with you. We’re excited to play it for you on tour!! See you soon!” – The ‘Don’

On April 20, the band will perform at the Hollywood Palladium in Los Angeles as part of their upcoming spring U.S. headline tour, which begins on April 14 in Missoula, MT, with support from Eagles of Death Metal and Russian Circles. The band will also perform at several festivals, including the Carolina Rebellion Festival on May 5. Each pair of tickets purchased online (excluding festival dates and the May 6 Philadelphia show) includes a choice of a physical or digital copy of Emperor of Sand. Tickets are on sale now. Please see below for all tour dates and visit mastodonrocks.com/tour to purchase tickets.