As previously reported, Manowar has announced they will retire after an upcoming farewell tour, called The Final Battle.

The band has announced The Final Battle 2017 German dates, and they are, as follows:

For ticket info and constant updates follow Manowar on manowar.com and facebook.com/manowar. 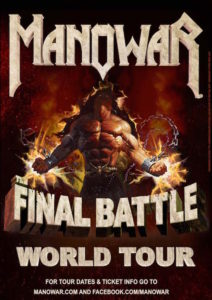 BON JOVI COMPLETE RECORDING THEIR NEW ALBUM, “THIS HOUSE IS NOT FOR SALE” ›