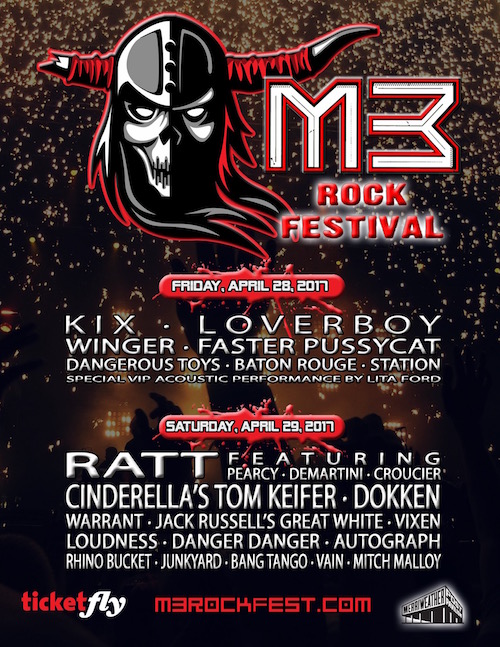 M3 Rock Festival, the definitive, can’t-miss annual gathering of heavy metal bands and those that love them, will turn back clock to the 1980s once more at Columbia, Maryland’s Merriweather Post Pavilion on Friday, April 28th and Saturday, April 29th. For the first time ever, M3 will expand to a third day to host the new M3 Southern Rock Classic.

Known for its idolized metal bands and colorful, devout audience, the first two days of M3 will once again feature full sets of glam rock and heavy metal hits. The festival will take place on two separate stages, each simulcasting the other, giving fans the option to stay in one seat and watch all the bands as they appear on both stages, or move from stage to stage without missing a note.

M3 has become more than a festival. It’s a happening, a congregation of those who fell in love with hair metal in the ‘80s and teenagers getting in on it for the first time. Each year VIP and Pavilion seats sell out quickly. Two-day, three-day and VIP packages will go on sale Friday, December 7th at 10am EST through ticketfly.com. Tickets can also be purchased at the Merriweather Post Pavilion and 9:30 Club box offices. If available, single-day tickets will go on sale in the coming weeks. For more information, visit ticketfly.com or M3rockfest.com.

GUITARIST DJ ASHBA ON WHY HE LEFT GUNS N’ ROSES, “I NEEDED TO GET BACK TO MY ROOTS” ›