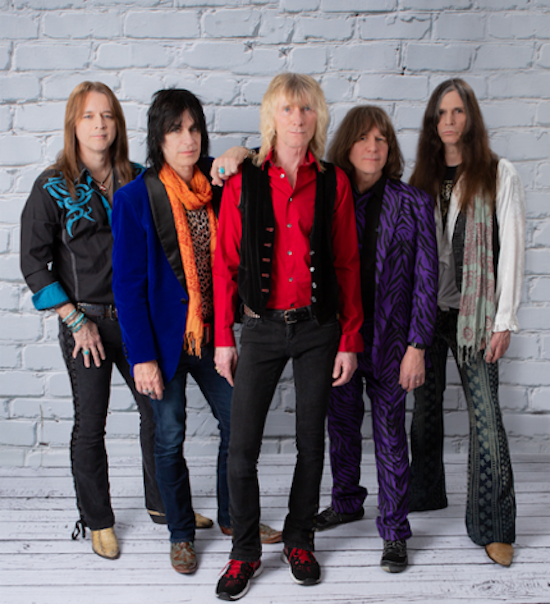 Sleaze Roxx: How soon after Fuse 30 did you start thinking you could do a remix of Midnite Dynamite?

Steve Whiteman: It came up one night when we were playing in Texas. Beau Hill came to see us. He lives in Austin. He came to the show and we hung out with him all day. After the show, we were hanging out talking and he said, “You know, I’d like to get another shot at Midnite Dynamite.’ I thought he was joking. He did such a great job with the remix of Blow My Fuse but he did produce Midnite Dynamite 35 years ago. I think with technology being better now and the fact that he always loved that record, he just wanted another crack at it. We were like “Hell yeah!” Like the last time around, [bassist] Mark Schenker got all of the tapes from Atlantic, he got them all baked, then he got them digitized and off we went. Beau kept on sending us these incredible mixes. I was like “Holy hell!” There was so much clarity to the new mixes. The original version had that ’80s reverb and all these layers of crap that a lot of the time, the performances got lost with the new remix. All that is gone. The vocals are right up front, which I love. We knew he would do a great job this time around too after hearing what he did with Blow My Fuse.

Sleaze Roxx: With Midnite Dynamite Re-Lit, do you hope the album will get the attention that it didn’t get back in the day? It’s an underrated record.

Steve Whiteman: It’s definitely underrated. We felt that we had a ‘hit’ record. We had one of the most powerful record companies in the world releasing our records. We had good management at the time and we had Beau Hill coming on board hot off the heels of a Ratt hit record. What could go wrong? We felt strongly about the record. We felt it was a hit, but Atlantic Records didn’t quite know what to do with us. They released Cold Shower. It had very little success and little MTV airplay. When the song didn’t take off, they were done with it. The people at the label were like. “Let’s start thinking about the next record.” We were like, “Hold on, you’re out of your minds.”

We were not about to let that record die like that. We took it upon ourselves to use our bar money…and without ample support by the label, we took it upon ourselves promote that album. We feel that is what set up the success of Blow My Fuse. We were relentless and going to L.A. was monumental. There we were opening for unsigned bands and we were on a major label. We opened for bands like Guns N Roses.

Sleaze Roxx: You had a lot of different sounds happening on Midnite Dynamite. There were elements of pop hard rock and some bluesy guitar licks and solos. How much of an influence was Beau Hill?

Steve Whiteman: He was a big influence on that album but you also have to take in account that we were coming off a second ‘limp’ record that we were forced to make by the label, by management and the producer of the Cool Kids record. We felt like on the next record, we needed to make the record that we wanted to make. We wanted melodies. Bands like Aerosmith, The Rolling Stones and AC/DC were huge influences for us. That was in the vein of what we wanted. That’s how we wanted to be known for and recognized for. It was intentional to get away from that pop sound and get a lot harder.

Sleaze Roxx: Beau has brought in sessions guys or people from other bands to be part of the records he’s produced. How did Anton Fig [Frehley’s Comet, The Late Show With David Letterman] wind up on Lie Like A Rug and Sex on the original album?

Steve Whiteman: Jimmy Chaflant had a couple of ruptured discs in his neck. We were going to leave the studio and get back on the road. For us to be able to do that, Jimmy had to take leave from recording and have this operation on his neck. So Beau brought Anton to play on Sex and Lie Like A Rug. When it came time to do this remix, Jimmy wanted to go back and put his drums on those two songs. So, on the remix, that’s Jimmy playing drums on those songs now. Well, when Ronnie Yonkins got wind of that, there was some guitar stuff that he wanted to redo that Mike Slamer played on. When we got people playing on the original record, it came down to budget. We were coming to the end of the recording and we had to get things done because we were going over budget. We brought in people that could do it in a snap.

Sleaze Roxx: You mentioned Mike Slamer who was featured on Walkin’ Away and Scarlet Fever. What’s the story behind him playing lead on those songs?

Steve Whiteman: The honest truth is that Donnie Purnell was such a controlling guy that, when those guys went into the studio, he was just ‘hovering’ over them and telling them where to place their fingers and how to play things. He would stymie their creativity. We were going over budget and we were running out of time. Beau felt the pressure to bring in Mike Slamer, because he has faith that Mike could come in and knock it out. In fairness to the guys, they were ready to go in and record the solos that you heard in the demos, but for whatever reason, Donnie being Donnie stymied their creativity.

Sleaze Roxx: Have you ever performed an album top to bottom? How interested are you in doing something like that?

Steve Whiteman: We have done Blow My Fuse. It was fun and special for us.

Sleaze Roxx: So when you performed Blow My Fuse top to bottom, was there a particular song or songs that were harder than the others?

Steve Whiteman: Yeah, I think Piece of The Pie was hard to relearn that song. We hadn’t performed that in like 30 years. Going back and singing some of that stuff was tough. People have asked if we are going to do the same with Midnite Dynamite and play that top to bottom. There’s some songs on that album that I just can’t do vocally. I know the idea of doing an album top to bottom sounds great but sometimes, it just is not feasible if you’re the singer [laughs].

To read more details about Midnite Dynamite Re-Lit, please go here and to re-order the CD, go to the band’s webstore where fans can also purchase special commemorative merchandise including T-shirts, hoodies, keychains, and more.