KISS frontman Paul Stanley was recently a guest on “The Joe Rogan Experience,” where he discussed his former bandmates drummer Peter Criss and guitarist Ace Frehley implying that they carried “a lot of resentment” over the fact that some of the other members of the band were more “focused” and “driven” to succeed than they were, which ultimately led them to sabotage their careers.

“It’s very difficult to move forward when two of the people are, at times, like flat tires,” Stanley explained [as transcribed by Blabbermouth]. “It becomes more of a problem when their reason for being is to foil and to throw off track what you’re trying to do. So, at some point, it really became more about trying to disrupt what we were trying to do with no regard to whether or not what they wanted to do was right or wrong; they just wanted, ‘Let’s screw Gene [Simmons] and Paul. So we’ll say no, and they’ll say yes.’ So it really became very, very, very difficult.”

Stanley claimed that he was in favor of splitting the band’s finances evenly in the early years, but that things changed once Ace and Peter started putting less effort into the group, leaving Paul and Gene to take over. This, in turn, caused a rift between the bandmembers, necessitating a change in the group’s lineup.

When asked why he thinks Ace and Peter were seemingly so intent on working against their bandmates, Stanley said, “I think self-sabotaging comes into it, because, I think, that’s been something that’s run through parts of their lives. But I also think that there was a lot of resentment. And, honestly, I don’t believe in resenting people for what they can do that you can’t. if you’re lucky enough to have people around you who can do what you can’t, make them your best friend. Everybody can’t be the best at what they do, but you can benefit from being around those people. So, look, I never wanted or expected anybody in the band to do necessarily the same amount of work that I did, but I expected them to give a hundred percent. I was all for splitting things evenly in the original lineup of the band up until those guys departed the first time, but you have to give your best.”

Stanley says that ego clashes and disagreements over songwriting credits contributed to creating an unhealthy environment and he makes no apologies for taking charge of the group.

“I don’t know the mentality that wants to sabotage what ultimately benefits you,” Stanley said. “Look, if you’re in a band that’s doing great and you’re not the primary songwriter and the primary singer, well, you should revel in what you have. You know, the idea of equality… Some have to be more equal than others. Everybody can be in car together, but somebody’s gotta drive. We’re all going in the same direction. But when people reach the point of saying, ‘Well, I want an equal amount of songs.’ Well, do we leave off ‘Strutter’ so we can put your song on, or do we leave off ‘Detroit Rock City’? It doesn’t work like that. I don’t believe that there’s any birthright or that we should expect a quota in anything. We get what we deserve, and somebody has to decide that.”

He continued: “The key to a great band or any great situation is doing what’s best for the situation, not what’s best for you. I don’t have to be right, I just wanna see the right thing happen. So if you’re more tied up in the ego gratification or in the control factor… I honestly don’t mean to control anything, but I do have a point of view, and I guess I’ve earned my place at this juncture. But everybody gets a chance to state their views, and hopefully they are always with the best intentions, and I think that’s the way the band works now. We have a drummer [Eric Singer] who doesn’t like to take a solo, and this guy could play a better solo with one hand than most drummers could play with every limb of their body. So it’s all for one and one for all.”

In other KISS news, The Pulse Of Radio reports that “Love Gun: Deluxe Edition” will be made available on October 27th. The two-disc CD features the original 1977 album, along with a bonus disc featuring assorted demos and live tracks.

Vintage Vinyl describes the release as “the first disc includes a remastered version of the original album while disc two has demos, three live performances from a 1977 Lakeland, Florida concert and an interview with Gene Simmons. A rarity for any expanded edition of an album, the deluxe edition includes a glimpse into Paul Stanley’s creative process on Love Gun (Teaching Demo) with Stanley talking through the various chords of the song.” 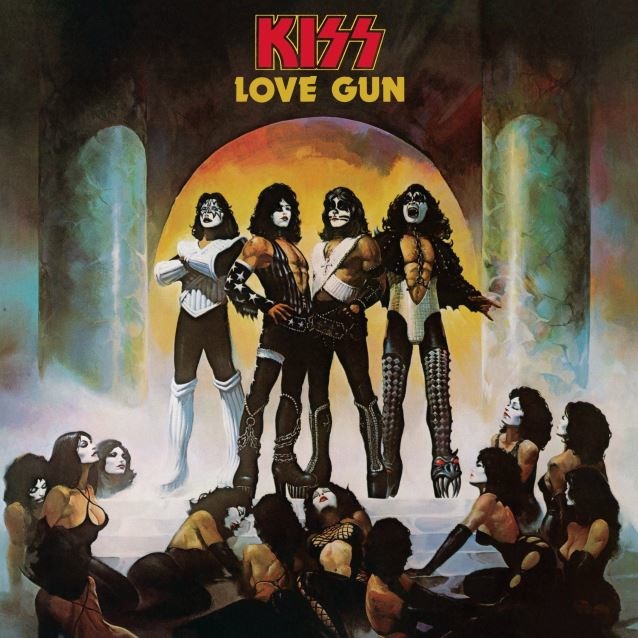