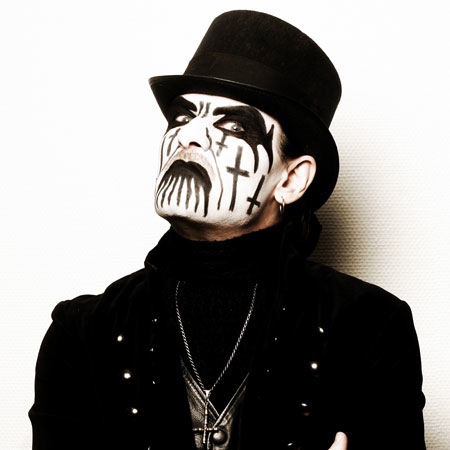 Rolling Stone: What sorts of freaky things can fans expect on your North American tour?

King Diamond: It’s a very dark show. King Diamond was always more Satanic than Mercyful Fate. And I’m not saying anything bad about Mercyful Fate – I love that band but sometimes people forget that King Diamond is the Satanic philosophy through and through. I was made an eternal member of the Church of Satan by Anton LeVey himself in 1988.

Rolling Stone: Where did you get the bones for the microphone stand you made out of a femur and tibia?

King Diamond: My younger brother’s schoolmate’s dad was a surgeon. He taught students how to operate on donated bodies, and when they were done, they would strip the skin off the bodies and put the bones in barrels. He took a couple of bones home to his son, and my brother convinced him to give it to him. I feel like the person who they belonged to is now getting to see the world in a different way. I don’t mean that in a sick way at all.

Rolling Stone: What is life like for you, since your surgery? [The singer had triple-bypass surgery in 2010]

King Diamond: I have a braided, metal wire going down the middle of my chest, underneath my skin. I saw it on an X-ray of it; it looks like a piece of jewelry. When they sawed me open to do the operation, my ribcage was like a double door, to be blunt. They put the wire in to help it grow back together. I’m lucky. You can barely see where I was glued together. I can’t take painkillers, because they thin my blood. So when I have pain, I have to live with it. But that’s how it is. To get a second chance is amazing.

King Diamond: So you’re working on a new album?

King Diamond: We’ve done a lot of stuff. We are going in some new ways that are going to be amazing. I’ve been building a studio so I can do my vocals at home. Once it’s completed, we can start recording. I have a title for a new record, but I won’t say it. [The record] will encompass the things I need to write about after what I went through. But I can’t say much about it because I haven’t talked to the rest of the band about it.

‹ NEW ENGLAND REUNITE TO PERFORM IN MASSACHUSETTS IN AUGUST