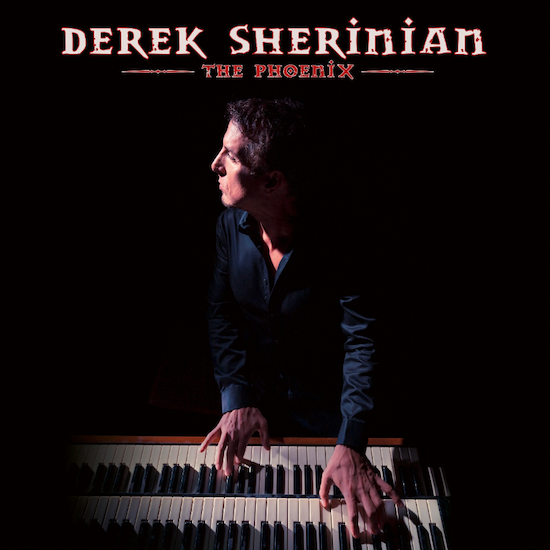 As previously reported, keyboardist Derek Sherinian, (Sons of Apollo, Black Country Communion), will release of his new solo album The Phoenix on September 18th. Ruben Mosqueda of KNAC.com spoke with Sherinian, portions of the Q&A appear below.

KNAC.com: You always strategically place special guests on your albums. Did you have people in mind as you were writing these songs and make the calls?

Sherinian: I knew Joe [Bonamassa] was going to play on Them Changes because he and I had discussed that before. I also talked with Kiko [Loureiro] about writing a song so I knew he was going to be there. As far as the other players go, Zakk [Wylde] is always invited and the opening track The Phoenix was just right for him. The songs tend to work themselves out, if I don’t have a preconceived notion, it usually becomes obvious who should play on what.

KNAC.com: Was the gap between [solo] albums motivated by the state of the music business? What I mean by that is that people don’t consume music in the same fashion as they did even a decade ago. Sales are low and people have a short attention span.

Sherinian: Yeah, you’re looking at an example of that, with all of the downloading, the record sales dwindled from release to release over time. It didn’t matter how good the record was, it was getting downloaded and the record advances got less and less. So to me it didn’t make sense to make a solo record anymore. I finally decided to bite the bullet and just go for it. I just hope to break even on this thing and pay for my Sushi bill, then I’d be happy. I think as long as I get to make the records with the people that I want, I’m happy. My solo records are truly a labor of love.

KNAC.com: Sons Of Apollo were pulled off the road when Covid was spreading across Europe…

Sherinian: Well, we pulled ourselves. I just want to clarify that. We were actually the first band to do it. Like you said we were in Europe and it was a tough call and ultimately we decided to come home. Nobody has seen anything like this. Billy Sheehan, who has been doing this longer than any of us, has never seen anything like this. Ultimately, we were looking out for our safety and we made the painstaking decision to come home. We just didn’t want to be quarantined and stuck in another country. The day after we canceled our tour, you started seeing all these other bands pulling their tours. There’s some fear behind it, this is all uncharted territory for us.

KNAC.com: [Michael] Schenker will be releasing a new solo album in January 2021 and I saw in the press release that you are one of the people listed as a performer on the solo album.

Sherinian: Yeah, that is pretty awesome. I got a call to play on Michael’s record a couple of weeks ago to play on a track. I didn’t speak with Michael directly but evidently he was so pleased with my track and I was really overjoyed. His manager contacted me and he asked, ”How much do we owe you”? I said ”I can’t accept any money to play on the great Michael Schenker’s album. If he wants to return the favor and play on my next solo album that would be awesome.” I got a reply almost immediately that said that he would love to. I immediately got to work on a song that brought me back to 1980 to the first MSG record. I again contacted Simon [Phillips] who as you know was the drummer on the first MSG record. I wrote a song that I feel is on par with Into The Arena. I have shared it with people and they have said that this is the best thing since that. I went into the studio and cut drums and bass with Simon and Tony Franklin. It’s being shipped to Germany today [laughs].

Sherinian: [laughs] I know right? My new album The Phoenix hasn’t even been released and I’m already writing the next one! [laughs] I can’t wait to hear Michael’s brilliance on that song because it was written for him and in honor of him. He’s one of the greats and an absolute treasure of a player.

KNAC.com: The next thing I wanted to ask was about a dream guest for a record. Looks like you can scratch Schenker off the list. Who does that leave?

Sherinian: There are a few, I think the unicorn player for me would be Jeff Beck. Before it’s all said and done, I want to get him to play on one of my records. Simon and I were discussing this, he says that he’s a hard person to reach. I don’t know, I can try and see what happens.

KNAC.com: Is he harder to get in touch with than Eddie Van Halen? I recall that you were at some backyard party on stage playing with Edie Van Halen. I saw that on YouTube a few years ago. What’s the story behind that?

Sherinian: Yes, that was a wild situation. Stefan Adika had this band called The Star F–kers, they’d play at The Cat Club in Hollywood, CA. To make a long story short, Van Halen’s fiance, now his wife, saw this band and knew that they were going to have a party at Van Halen’s house. He had just done this collaboration for music for this porn director to be used for the film and they were going to do a launch party at Van Halen’s house. The Star F–kers were hired to be the party band. My friend Stefan knew how huge of a Van Halen fan that I am, so even though they didn’t use a keyboardist in the band he hired me for the night just so I could meet Van Halen. We arrived at the house and there is Eddie. He wound up taking me and Brian Tichy to his recording studio 5150. It’s really surreal to try to remember the sequence of events but we must have been in the studio for 20-30 minutes. He’s telling us all of these stories and then I looked on the wall and there’s the shark guitar from Women And Children First and then there were all the reels of tape with all of the Van Halen masters. I was like “Holy shit!” This was all happening even before the gig, so then we played the gig and he got on stage with us. It was a dream, the dream will be fully realized if I could get that guy on one of my records.

To read more about Derek Sherinian’s solo album, The Phoenix, and to listen to the album’s first single, Empyrean Sky, please click hand.

SEVENDUST RELEASE LYRIC VIDEO FOR “BLOOD FROM A STONE,” ALBUM OUT OCTOBER 23RD ›