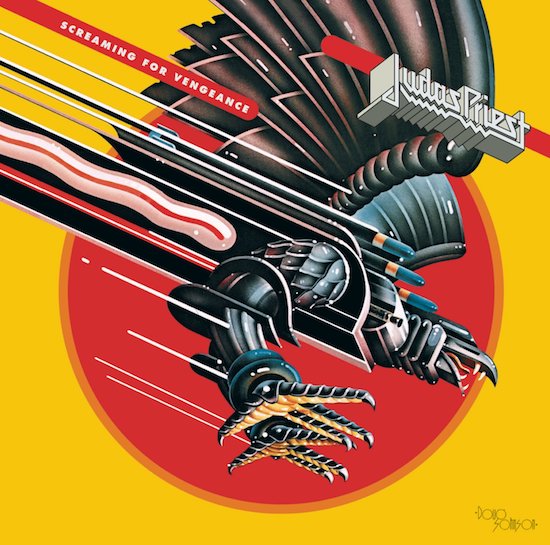 Bryan Reesman of GRAMMY.com spoke with Judas Priest band members Rob Halford, Glenn Tipton and Ian Hill, along with producer, Tom Allom, about the band’s Screaming for Vengeance album, which is celebrating its 40th anniversary. Excerpts from the interview appear, below.

“[Some people] didn’t know they were metalheads until they heard Priest,” [Rob] Halford tells GRAMMY.com.

GRAMMY.com: I was listening to the album again fully, and the lyrics are very relevant today. I listen to Electric Eye and Screaming For Vengeance and that dark vision resonates with modern events.

Glenn Tipton: Yes, that’s true. It wasn’t done intentionally. A lot of what we play is very current.

Rob Halford: I remember when I was writing the lyrics for Electric Eye. And, of course, this was before the internet. I was reading about spy satellites and the way that our privacy was going to be more and more difficult to hold on to. That was enough for me to get my brain cells going for a lyric that is so appropriate 40 years later, more so than ever…

GRAMMY.com I heard that You’ve Got Another Thing Comin’ was assembled rather quickly and was possibly the last song recorded?

Tom Allom: They had this idea with the riff and everything, which I think Glenn mostly came up with. “Let’s try and run it through” and I was in the process [of mixing]. It wasn’t the last song [to be done] because I was checking out the drum sound. I had the drums all miked up ready to go, and they wanted to run through the track. So they set the guitars and the bass up in front of the drums and they ran it through without headphones. The guitars were turned down with the overdrive turned on quite high for the crunch.

I recorded this run through, and I said, “Well, you’re not gonna get a better take on that.” And they wanted to redo all the guitars and do the usual stuff and have the big ambient side on the guitars. I think I let Glenn overdub one other rhythm guitar a little. I remember it as clear as daylight. They might remember it differently. Then, Rob went through two or three lyric changes and melody changes. I have to say, I’m not always right, but I bloody well was on that occasion.

Rob Halford: It was a cool track, but we had no idea that it was going to blow the doors off of rock ‘n’ roll radio in America.

GRAMMY.com: Priest previously had dueling guitars and big guitar harmonies in the ‘70s, but this was the first album that they noted who did what solo in the liner notes. And Glenn and K.K.’s signature interplay really gelled here.

Tom Allom: I felt like it was great rivalry between them to outdo each other. They both were trying to play things that they couldn’t play, and they went on working on them until they could. It was that rivalry that made the guitars so bloody brilliant. I can particularly remember Glenn starting to come up with a solo and he was struggling with it. He would work on it for days, if necessary, until he could play it.

Obviously, we were able to punch in mistakes and all that, but these were the analog years. By the time they perfected it, they would go out and play that track live, no trouble at all. That was very good to see.

GRAMMY.com: There’s just something about that interplay that was unique. Sometimes their styles would meld together and mirror each other a bit.

Tom Allom: When they were both playing rhythm guitar on a track and they were essentially playing the same thing, because their styles were different it made the sound really big. The intonation was different from each of them, and that difference made it bigger than if one of them was playing the part and then double tracking it. They each created a different vibe off their instrument.

GRAMMY.com: Screaming was the second album that the group recorded in Ibiza, along with the previous Point Of Entry and subsequent Defenders Of The Faith. You guys were this dark, gritty band from Birmingham and here you were having fun in the sun. Why did that work for you?

Ian HIil: Multiple distractions [laughs]. It fitted perfectly with Tom Allom’s style, the laid back, take your time over it, patience with it — all of that. If you were in the studio, and you’d been at something all day, there’s no point in continuing to try and do it. Go off and play a round of golf, go swim in the pools, and then come back to it. You’ll come back with a different attitude. It was perfect for Tom and for ourselves really. You’ve got to be in the right frame of mind. Ibiza is one of those places….Around the edges, it’s very commercialized, but you get to the interior of the island, it’s like stepping back 200 years, you know? He just gave us that little bit of leeway. A little bit of leisure, if you like. It put us in a great frame of mind.

Glenn Tipton: It worked because we never record in the metropolis [for any album]. We can write anywhere. It felt relaxed there. We were left alone so we just got on with the album, and that brought us back again.

Rob Halford: There were a number of things that took us there. But it’s magical. We still have this beautiful relationship with everything Spanish. It’s very much like a Shangri-La, you know? For artistic purposes, it can be just a fantastic place to generate ideas, whether you’re a musician or a painter, or whatever it might be. For creative people, there’s just something magical about the island.

Tom Allom: We behaved ourselves in the studio. Pretty much. [Laughs] Ibiza has always been a party island. Orlando wasn’t a party place.

GRAMMY.com: You recorded in Ibiza and then mixed in Florida, correct?

Tom Allom: We did that album in two halves. We did the first half in Ibiza. Then there was a management split and a lot of angst going on on the management front. We actually didn’t reconnect for about three months and we finished off tracking the album at Bee Jay Studios in Orlando. And then we mixed it all in Bayshore Studio in Miami, which was where I was living by that time. And I liked the studio. We mixed it down there. So we recorded it in two different places, in two different eras almost. When I listen to it, I still can’t quite remember which tracks were recorded in Ibiza and which were recorded in Florida.

We left Ibiza not quite knowing when we were going to reconvene. It was a bit of a strange time. I just moved to Florida shortly before I went back to London. My mother died. Their managers split up. Then we reconvened in Florida. It’s actually extraordinary that it turned out as well as it did really because it was a bit fragmented.

GRAMMY.com: Tom came from a totally different social background than you guys did. What is it about him that you worked with him for a decade? He wasn’t a working class guy from the Midlands, he was a little more “posh.”

Rob Halford: He’s just a beautiful guy. He’s a wizard in the control room. He knows what he’s talking about. He gave us and still gives us confidence when we work together. We will listen to what he has to say, and he was always full of great ideas. He was an accomplished musician himself as far as being able to play the piano and pick up the notes. All of the great things that producers should be able to do.

Ian Hill: He’s got a great feel for music, Tom. He’s probably the best in the business. Tom is a beautiful man at heart, he really is. Although we come from different ends of the social spectrum, we did gel with him pretty quickly. The first time we met him [in 1979], we were all thinking who the hell is this? He was this very plummy-voiced, obviously upper middle class lad who didn’t know anything about heavy metal. About an hour later in the pub, we’ve had a few drinks and were getting on like a bonfire. And it went from there. The first thing he did was mixed the Unleashed In The East live album. He did a tremendous job on that, and then we carried on from there [for nearly a decade].

Glenn Tioton: When we first met him it gelled straight away. The formula worked instantly. His talent shone through. When we’ve worked on box sets [and other releases] since I’m amazed at how much Tom did do for us.

Tom Allom: I’ll tell you, I went to a posh school, a private school. And then somehow I got a place at university. I wasn’t that academic. But I ended up at the University of St. Andrews except it wasn’t in St. Andrews. I went for engineering, and the engineering faculty was in Dundee, Scotland. And Dundee, Scotland is and was a very rough town, really rough. I lived there for three years. Then, I got a job in a recording studio when I finished university proper.

I don’t think I could’ve done that job if I had come straight from school. I had learned some rough edges, and I was confident [with Priest] because I could think, “Okay, you guys are from Birmingham, but I have lived three years in Dundee which makes Birmingham look like bloody Bond Street in London.” And it didn’t bother me that they thought I was posh. By the time we’d finished doing the Unleashed album [in 1979], we were getting along really well. Rob liked working with me, and I think they all did really. That’s why they asked me to do British Steel. And by then they got over the fact that I was posh.

GRAMMY.com: Were you surprised by how MTV embraced the band at the time?

Glenn Tipton: Yes, a bit. Bands like Judas Priest were not usually featured on MTV, but I think our music crossed the point and was acceptable for MTV. [At a later point] we even knocked Madonna off the No. 1 spot.

GRAMMY.com: Are you still cool with the fact that Screaming is considered to be the definitive Priest album?

Ian Hill: Oh, yeah, I do. It was the ultimate seller. I don’t think we’ve sold more of any other album, and it was a step in the right direction. After Point Of Entry being panned a little bit, we came roaring back with that one. Then, like I say, Defenders was Screaming on steroids. It took us to that peak. We could have carried on making that kind of album, but they wouldn’t have made any more progress from Defenders. Loads of other bands do that. They find their formula and they stick to it and people [like] them for it. But like I say, we’re always trying to take that step forward.

Glenn Tipton: It’s not everybody’s No. 1, but I would think its direction comes very close to what most people consider the best Judas Priest album. It is a milestone album.