JUDAS PRIEST’S IAN HILL ON SEEING GUITARIST K.K. DOWNING AT THE ROCK HALL INDUCTION, “IT MIGHT KICKSTART SOMETHING, I DON’T KNOW” 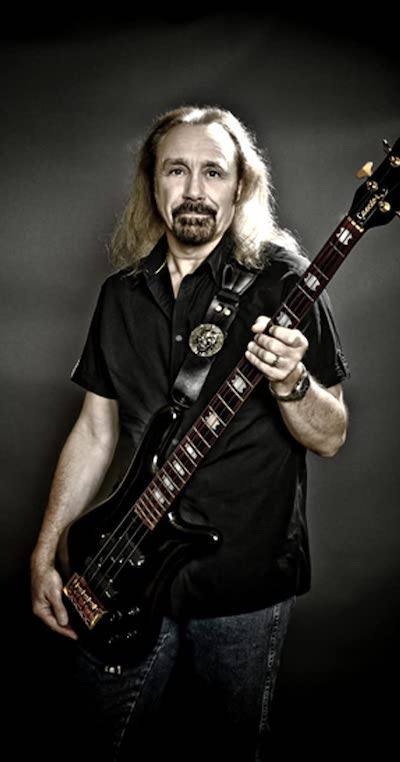 Judas Priest…set off on the fall trek of its North American 50 Heavy Metal Years tour earlier this month, making a stop at Detroit’s Masonic Temple on October 22nd.

At 71, Judas Priest bassist Ian Hill has zero intention of slowing down, but Priest has been a “victim of changes” over the years…Hill is the band’s only remaining original member. Longtime guitarist K.K. Downing left in 2011 citing “personal and professional differences,” and was replaced by Richie Faulkner. Then, longstanding guitarist Glenn Tipton stopped touring with the band after being diagnosed with Parkinson’s disease…

Metro Times: Did you ever imagine, back in 1974 when Rocka Rolla came out, that you would still be making music and touring this many years later?

Ian Hill: No, not at all. The thing is, way back then, the concept of someone our age still playing popular music didn’t exist. Even the old crooners, you know, the [Frank] Sinatras, the [David] Crosbys, they were just in their 50s and 60s. The old rock ’n’ rollers, the Bill Haleys and the Elvises, were in their 40s. There was nobody in their 70s still trying to rock around. I mean, in those days we were living from day to day anyway, you know, just surviving the day to get up the next day.

MT: How different is it touring now compared to back then?

Hill: Well, we’re way less stupid than we used to be. We’re a bit milder these days. Age does that to you. You tend to mature…It’s not, you know, partying every night after the show. I mean, that has been known to happen, but not anymore. Well, not for a long time anyway.

MT: Priest has always struck this interesting balance between these hard-hitting songs and tracks that are more commercially accessible and catchy. What’s the songwriting process like for you guys and do you go into it with an idea for the type of song you want to write that session?

Hill: Yeah, it’s funny because there’s no blueprint really. We’ve always just done what comes from within basically, and then put it down and hope everyone likes it. We’ve been lucky up until now. When we started, heavy metal didn’t exist, really. It wasn’t until about 1980 with British Steel that we became a bonafide heavy metal band. But coming back to the more commercial things, they played a very important role. And you can sort of blame the record companies to a certain extent, because they always wanted the radio-friendly track. [The radio] isn’t going to play, [Screaming For Vengeance‘s] Pain and Pleasure, are they? They’re going to want something nice and happy, or at least upbeat. But the thing is it got heavy metal across to all of these people that wouldn’t necessarily have been turned on to it at all.

I come back to our song, “You’ve Got Another Thing Comin’, I mean, that’s a perfect example. We were doing all right at that point in 1982. We were playing sort of 5,000-seater town halls and the Fox Theatres and things. And AM radio … picked up on that song and played the hell out of it! … It sort of got people interested in us, in particular, and in general gave the whole heavy metal movement a huge boost. And not just that record, but similar things from other bands as well. Those commercial radio-friendly tracks are not to be ridiculed at all. They’re popular for a reason. You get a good groove going to them, bang your head, you can dance to them, which you can’t to most heavy metal songs.

It’s a very versatile genre because of that. If you look at what happened towards the end of the ’80s, early ’90s, you’ve got bands like ourselves, and [Iron] Maiden, and Def Leppard … All of us have played songs that will make you weep all the way, to songs that’ll make you scared, and everything in between. And then it got more specific, so you became a grunge band, you became a speed band, you became a goth band, or a death band, and it’s all part of the same thing. All those different little avenues that became available all had its roots in Breaking the Law, you know, or whatever. That’s what started everything up.

MT: You guys were recently inducted to the Rock and Roll Hall of Fame, but Rob [Halford] wasn’t too thrilled about it. What are your thoughts on it? And why did it take so long?

Hill: Yeah, I think we’re all on the same page there. I mean, we’ve been in the game now for 50 years, and I think heavy metal is like the Cinderella genre. It’s a little bit overlooked because it’s not in your face every day. Obviously pop music and rap music, country music, it’s like every day you get in your car, you drive to work and you’re getting the same 40 songs thrown in your face all the time. Heavy metal, on the other hand, you have to go look for it … And I don’t think there’s any malice there. I think it’s more, and this is in the nicest way, a little bit of ignorance, and that’s why we’ve been overlooked over the years.

But who knows? [Black] Sabbath are there now, and Metallica, and ourselves. So maybe it’ll be the start of a new movement to get more [metal] bands inducted.

MT: Do you think there’s any chance of ever reconciling with K.K. Downing and him rejoining the band? We know he’s been doing his own thing with KK’s Priest.

Hill: I think time is not on our side for that, you know? Never say never, put it like that. [Downing’s] gonna be there at the Rock and Roll Hall of Fame anyway. He’s gonna get up and play some songs with us there. It might kickstart something, I don’t know. On the other hand, he might pull us all apart. [Laughs.]

MT: What’s the status of the new album you guys are working on?

Hill: The record’s practically finished. The music part of things … all the guitars, the drums, and the bass is down now. There’s Rob … He’s obviously been resting his voice for a while for the upcoming tour. You know, he doesn’t want to screw his voice up for that. … Now, obviously, we won’t be able to get home until Christmas. And there’s a possibility of an OzzFest in Europe in spring, so we’ll have to let the dust settle from that as well before we can release it. So, yeah, it’s looking like late winter, early spring 2023, 2024.

HAS GEORGE LYNCH HAD A CHANGE OF HEART ABOUT THE LYNCH MOB MONIKER? ›