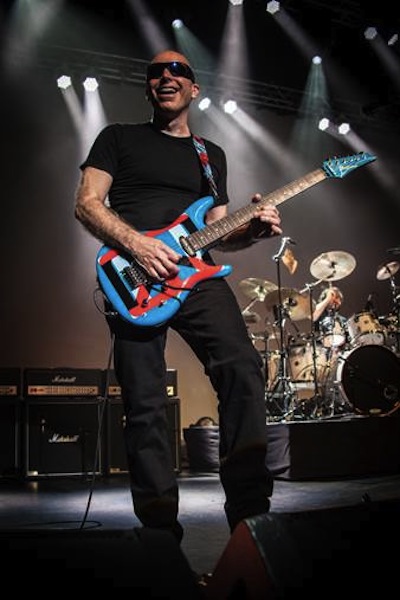 Joe Satriani will return to the east coast for three special appearances this June to celebrate the release of both, his career-spanning box set, Joe Satriani: The Complete Studio Recordings and his first-ever autobiographical memoir, Strange Beautiful Music: A Musical Memoir.

The first of these three shows finds Satriani returning to his hometown, playing The Space at Westbury in Long Island on June 7th. This will be Satriani’s first appearance on Long Island in a number of years and the anticipation level is high. The following Monday, in honor of Les Paul’s 99th birthday, Joe and his band will perform a 2-hour concert at the Iridium in NYC, the home of Les Paul’s legendary, weekly performances for many years. This event will be recorded for a fall 2014 PBS TV Special called Front & Center. Lastly, Joe and the band will wrap their brief east coast run with a stop in Ridgefield, CT for a show at The Ridgefield Playhouse. Following these special engagements, Joe and his band (Marco Minnemann – drums, Bryan Beller – bass and Mike Keneally – keys & guitar) will head to Europe for a number of Festival appearances and other shows ending in late July.