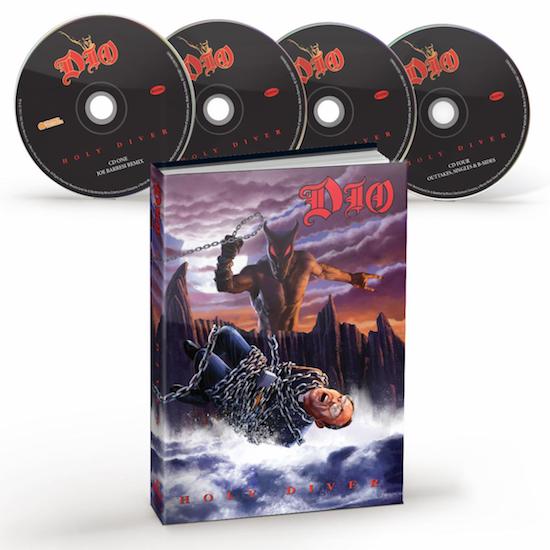 In the illustrated liner notes that accompany the Super Deluxe Edition, music journalist Mick Wall shares the album’s creation story, including the making of its crown jewel, Rainbow In The Dark.
He writes, “Lyrically, it was Ronnie James Dio at his poetic best…Musically, Rainbow In The Dark was also the band’s first truly collaborative endeavor. The inspiration for the monster guitar riff came from something Viv had written when he was 16. Vinny added his distinctive battle-cry beat, and Jimmy added the final touch with the infectiously simple keyboard motif.” The song was finished in 10 minutes, he adds.

Holy Diver: Super Deluxe Edition goes beyond the original album with a previously unreleased recording of the quartet performing live in 1983 at Selland Arena in Fresno, California during the Holy Diver Tour. Wyn Davis mixed the concert recording, which spotlights live versions of songs from Holy Diver (Stand Up And Shout and Rainbow In The Dark), Rainbow classics (Man On The Silver Mountain and Starstruck), and Sabbath staples, (Children Of The Sea and Heaven And Hell.)
The Super Deluxe Edition also revisits the Holy Diver recording sessions to uncover unreleased outtakes for several album cuts, including unheard takes for Invisible, Straight Through The Heart, and a version of Rainbow In The Dark that boasts an alternative guitar solo. There’s also an early version of Evil Eyes, a song that would resurface on Dio’s 1984 follow-up album, The Last in Line. A selection of rarities rounds out the new collection with mono and stereo 7” single edits for Rainbow In The Dark and a version of Evil Eyes that was released in 1983 as the B-side to Holy Diver.